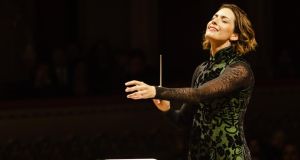 Alondra de la Parra will conduct at the celebratory Mexican-Irish concert in the National Concert Hall.

The last Spanish ruler of Mexico, strange to say, was a man by the name John O’Donoghue-Ryan. Or at least that’s what he would have been called in the land of his ancestors. But he was born in Seville, in 1762, by which time his forebears had gone native to the extent of labelling him Juan O’Donojú y O’Ryan, in which form he was dispatched, 60 years later, to New Spain, as it then was.

The politics of Mexican independence, and O’Donojú’s role in it, are complicated for a layman. But in general, and viewed from the 21st century, when colonialism is severely out of fashion, he seems to have been one of the good guys. He was certainly a liberal on the question of Mexican autonomy, although he may not have had much choice.

By the time he arrived there in July 1821, the country was almost entirely behind a rebel general Agustín de Iturbide. So O’Donojú negotiated a treaty that effectively handed de Iturbide the crown. And despite intervention by the Spanish military, he then also ensured a peaceful handover, signing Mexico’s independence into law in September.

Alas, he didn’t live to see much of it. He died only days later, apparently from pleurisy, but possibly from something more sinister. According to one account, de Iturbide – soon to be Emperor Agustin I (although not for long) – took the precaution of poisoning him.

There’s another story, from earlier in O’Donojú’s career, back in old Spain, that also casts him in favourable light. He was then an officer in Spain’s Peninsular War against Napoleon. As such, he once had to act as interpreter at a meeting between a crusty old Spanish general and a still-rising young Irishman called Arthur Wellesley.

The two were supposed to be discussing joint plans to win the Battle of Talavera (1809), but the old general’s answers to Wellesley’s questions were unhelpfully curt. So while interpreting them, O’Donojú also fleshed them out a bit. And it must have helped, because they won the battle, as a result of which Wellesley became Viscount Wellington.

For these various reasons, O’Donojú may be a presiding spirit at events to mark an impending milestone in international affairs: the passage this summer of 40 years since Mexico and Ireland established diplomatic relations. Yes, begun in 1975, during turbulent times, the relationship has now reached comfortable middle-age: a fact perhaps underlined by an incident last year.

It’s often said that a joint history of being on the receiving end of colonial oppression has given the Mexicans and Irish a special empathy. That may have been what motivated His Excellency Carlos Garcia de Alba, Ambassador to Ireland, to offer mediation during our national Garth Brooks crisis of July 2014.

Never mind the cinco de Mayo. The cinco de Julio – Brooks’s five sold-out concerts at Croke Park, which precipitated a bitter war of words between the Plain People of Ireland and Dublin City Council – will be recalled in song and story for many years. But sad to say, not even the Mexican ambassador could save the day for the line-dancing insurgents, who were put down with great brutality.

Less sad to say, perhaps, the music of Garth Brooks will not feature at an event in the National Concert Hall next Friday, February 27th, to kick-off celebrations of the ruby anniversary. Instead the programme will be classical, from a bilateral mixture of composers including Mexico’s Carlos Chavez and Ireland’s Frederick May.

The RTÉ National Symphony Orchestra will do duty to both those, and others. But the concert will also be unusual in taking place under the baton of – wait for it – a female conductor. Yes, there are a few, and Mexico’s Alondra de la Parra is one of the best, as witnessed by a long string of awards already, although she’s still only 34.

Friday’s concert is part of a series of events in both countries to mark the milestone. And another historical figure who will feature centrally, in each programme, is William Lamport. This year may or may not be Lamport’s 400th birthday. In any case, he originated in Wexford, circa 1610-15, and ended up in Mexico where he was burned at the stake, or hanged, or a bit of both.

In between, he led a life of great adventure, being among other things an early champion of Mexican independence. So intrigue-filled was his career that at least one commentator has identified him as the model for the fictional Zorro. But no doubt that and other questions will be disputed at duelling symposiums, in Ireland and Mexico, later in the year.

Breakfast in Ballsbridge: When Audrey Hepburn met her dad in Dublin
8