A century ago this weekend, the 7th Royal Dublin Fusiliers landed at Suvla Bay 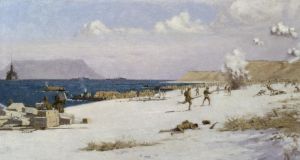 A painting of troops landing at Suvla Bay, August 1915

Many years after he came home from Gallipoli, Cecil Gunning, a member of the “Pals” D Company of the 7th Royal Dublin Fusiliers, wrote an account of the day he, his brother Golly and their company charged the Turks on the Kiretch Tepe Ridge on the western edge of Suvla Bay on August 16th, 1915. “Pals” was a recruitment concept that encouraged groups of young friends to join the army together. The Dublin “Pals” were drawn largely from Dublin sports clubs.

On the previous day, the attack along the rocky ridge by other Irish units – the Munsters and Inniskillings – was successful to a point on the ridge known as Jephson’s Post. It was so called after Major JN Jephson of the 6th Munster Fusiliers, whose men had reached and held this position.

On the night of August 15th, the 7th Dublins came up from the beach at Suvla and relieved the men at the front line. The Turkish trenches were so close to the Dublins that Cecil noted he “could hear the Turks distinctly and every little sound gave one the impression that they were crawling slowly up to you”.

At dawn on Monday August 16th, the Turks counterattacked with bombs and hand grenades. Some of the Dublins in the front line caught the bombs and flipped them back before they exploded. Most who did so were eventually killed. One Dublin Fusilier named Albert Wilkin caught four of these Turkish grenades but the fifth one he caught blew him to pieces.

What followed was the barbarism of close-quarter fighting with hand and bayonet. The Dublins had no grenades of their own and pathetically resorted to throwing stones at the Turks. A counter charge by the Dublin Pals managed to hold off the Turkish attack.

Somewhat naively, Cecil Gunning noted in his diary: “Dublin would be the proud city when it read the news of how gallantly we fought and fell.”

Pride in some quarters perhaps, but the prevailing sentiment in Dublin city amongst the relatives and loved ones of those who fought and died in Gallipoli in April and August of 1915 was sadness. For the first time in the first World War, the Gallipoli campaign brought the killing home to a cross-section of Dublin society.

The 1st Dublins who went ashore at Sedd-el-Bahr in April 1915 and suffered appalling losses were predominantly from the tenements. The Dublin “Pals” who attacked the Kirtetch Tepe Ridge in August were all volunteers and mainly came from the educated and professional classes.

Toffs among the Tuffs

There were many sportsmen, in particular rugby players, among the Dublin Pals who fought the Turks on August 16th. Paddy Tobin was a 21-year-old medical student at Trinity College Dublin and played for Lansdowne RFC. He was shot in front of Cecil Gunning when the Turks charged.

Willie Boyd, aged 22, from Mountain View Road in Ranelagh was a commercial traveller before he joined the Pals. He played for Bective Rangers RFC and was killed on the ridge.

One of the lucky ones to survive the killing on the ridge was William Joseph Nagle, a dairy farmer from Sillogue in the Ballymun area of north Co Dublin. He played for St Mary’s College.

Jasper Brett played for Monkstown RFC and won a cap for Ireland in their match against Wales in 1914. Jasper survived the physical wounds of Gallipoli but not the mental wounds. Having been medically discharged from the army and sent home, he took his own life in mid-February 1917.

There is a memorial in Lansdowne Road’s Aviva stadium to the young men from the Irish Rugby Football Union Volunteers who died in Gallipoli.

On Saturday August 15th, 2015, almost 100 years to the day from the tragic loss of life on the Kiretch Tepe Ridge, Ireland play Scotland in Lansdowne Road.

When we sing Ireland’s Call, standing shoulder to shoulder, in a spirit of reconciliation could we spare a thought for Paddy Tobin, Jasper Brett and the hundreds of young Turkish men who died defending their homeland in a war that should never have happened.

Tom Burke is chairman of the Royal Dublin Fusiliers Association

Mad Men made perfect sense during the swirling disorder
9