Balancing chaos and pathos like nobody else, Kermit and co deliver a decent kids’ 2D platform game for the PS Vita 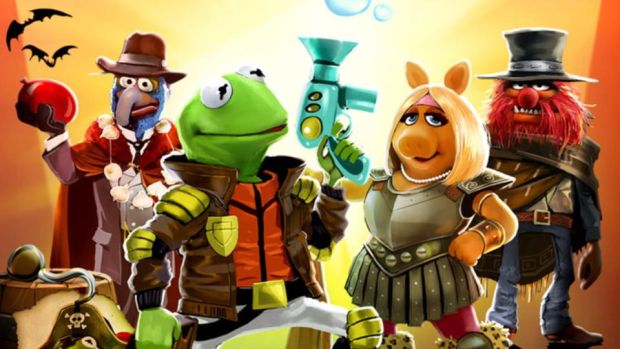 The Muppets are unique, and uniquely appealing; more anarchic than Disney animated characters, but warmer than the Looney Toons, they balance chaos and pathos like nobody else. So it’s odd that they don’t have a classic videogame. Even the divisive Mickey Mouse has the acclaimed Epic Mickey. And despite the many possibilities, a MarioKart rip-off, Muppet RaceMania remains the most beloved Muppet game. The Muppets Movie Adventures certainly doesn’t hurt the brand, but it also wouldn’t qualify as transcendent or (ahem) game-changing.

It’s a 2D platform game, mostly side-scrolling, with each chapter featuring a different Muppet, and each starring in its own genre film. For example, Kermit stars in “Greenlegs - the Swashbuckling Pirate Frog”. As a result, the peril factor is pretty low, with falls and deaths followed by an unseen director yelling “cut”. Its charms unveil slowly and – perhaps inevitably – the variety of playable characters brings a diversity of quality. The first level, starring Kermit, is quite dull, but the Miss Piggy one (a fantasy/castle ascent) is better, and The Good, the Bad and the Animal (a shooter-cum-platformer) is a treat.

With the wealth of characters and infinite possibilities, it would’ve been nice to mix up the gameplay somewhat – why can’t Miss Piggy star in a martial-arts film? Why not have visits to Dr Bunsen’s lab with puzzle minigames?

The gameplay mechanics are typical 2D platformer – walk or run, time your jumps to avoid projectiles or dangerous architecture, and throw some of your own. It exploits the Vita’s touchscreen controls only a little, with some token taps, swipes and drags.

This is an attractive game, with colourful, cute animation and lovely character design. Aimed at a young audience, The Muppets Movie Adventure is perfectly playable and agreeable. It might bore more seasoned gamers, but for a children’s merchandise tie-in game, you could do much worse. playstation.com