Who works longer: the Irish, the French or the Americans? 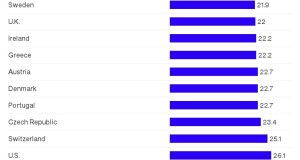 Swiss work habits are most similar to Americans’, while Italians are the least likely to be at work, putting in 29 per cent fewer hours per year than Americans do. The Irish however are somewhere in between; with an average of 22.2 hours worked per week, they are harder working than the French (19.3 hours); Germans (20.2) and British (22), but more lax than the Danes (22.7), Portuguese (22.7) and of course, Americans (26.1).

Americans are addicted to their jobs. US workers not only put in more hours than workers do almost anywhere else. They’re also increasingly retiring later and taking fewer vacation days.

A new study tries to measure precisely how much more Americans work than Europeans do overall. The answer: the average person in Europe works 19 per cent less than the average person in the United States. That’s about 258 fewer hours per year, or about an hour less each weekday. Another way to look at it: US workers put in almost 25 per cent more hours than Europeans.

Hours worked vary a lot by country, according to the unpublished working paper (PDF) by economists Alexander Bick of Arizona State University, Bettina Bruggemann of McMaster University in Ontario, and Nicola Fuchs-Schundeln of Goethe University Frankfurt.

Swiss work habits are most similar to Americans’, while Italians are the least likely to be at work, putting in 29 per cent fewer hours per year than Americans do. The Irish however are somewhere in between; with an average of 22.2 hours worked per week, they are harder working than the French (19.3 hours); Germans (20.2) and British (22), but more lax than the Danes (22.7), Portuguese (22.7) and of course, Americans (26.1).

The study was designed to make it easier to compare countries to each other, by capturing the overall hours per person, not just for people with jobs. That incorporates not just the length of the typical workweek but also retirement, vacation, unemployment, and other time spent out of the workforce.

Not all time spent at the office, shop, or factory is time well spent; output is also critical to the productivity equation. But it’s important to have a reliable calculation of hours worked per person to accurately measure productivity, the amount of economic value nations get out of each hour their citizens spend working.

The study’s detailed data could help researchers figure out why Americans toil so much longer than Europeans and which factors most influence productivity.

One theory is that Americans work longer hours because their additional effort is more likely to pay off. People earn a wider range of incomes in the US, so “workers have an incentive to try harder to move up the job ladder because a promotion is worth more,” said Dora Gicheva, an economist at the University of North Carolina-Greensboro, citing a study that compared the US with Germany.

Taxes are an issue. Despite what Donald Trump has said, taxes in the US are substantially lower than in Europe. Studies have suggested that this higher tax burden reduces the incentive to earn more by putting in extra hours.

“Americans are indeed richer than Europeans, and one reason why is because of taxes that depress the incentives to work in Europe,” said Lee Ohanian, an economist at the University of California-Los Angeles.

Maybe the key factor is that labor unions, along with other worker protections, are much stronger in Europe than in the US. “The data strongly suggest that labor regulation and unionization appear to be the dominant factors explaining the differences between the United States and Europe,” economists at Harvard and Dartmouth concluded in a 2006 study (PDF).

Generous pensions in Europe are also a strong factor in discouraging older people from working, the study said. In the US, more people over 65 are working than at any point in the past 50 years. The US’s shift from traditional pensions to 401(k) plans makes it harder for Americans to know when it’s safe to retire.

One thing is clear. The difference in hours worked between Americans and Europeans is more than a difference in cultures. As recently as the early 1970s, according to several studies, people in the US and Western Europe worked about the same number of hours per week.