Property costs push Dublin up league of ‘most expensive’ cities 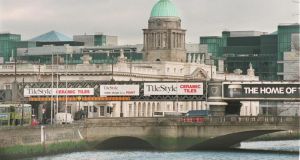 Rising property costs are pushing Dublin back up the league of the most expensive locations worldwide for employees working abroad.

The capital is back among the 50 most expensive places according to Mercer’s annual cost of living survey, rising two places since last year to 49.

While it still ranks well below other European cities like Zurich (3rd), London (12th) and Paris (46th), Dublin is the only city within the euro zone to rise in the rankings this year.

“Whilst most cities in the euro zone have fallen in the rankings due to the euro depreciating against the US dollar, Dublin actually moved up two places,” said Noel O’Connor, senior consultant at Mercer. “The survey identifies cost pressures on expatriate rental accommodation in Dublin as the key driver of this. In turn, this reflects the growth of the economy and the continuing high levels of foreign direct investment.”

Mercer’s survey is designed to help multinational companies and governments determine compensation allowances for their expatriate employees. New York is used as the base city, and all cities are compared against it. Currency movements are measured against the US dollar.

The survey includes 207 cities across five continents and measures the comparative cost of more than 200 items in each location, including housing, transportation, food, clothing, household goods, and entertainment.

Mr O’Connor explained: “Global mobility is a significant undertaking for multinational companies so a real understanding of the issues and costs involved in relocating staff to other countries is essential.”

Asian and European cities – particularly Hong Kong (2), Zurich (3), Singapore (4), and Geneva (5) – top the list of most expensive cities for expatriates. The costliest city for the third consecutive year is Luanda (1), the capital of Angola. Despite being recognised as a relatively inexpensive city, the cost of imported goods and safe living conditions in this country are available at a steep price.

The world’s least expensive cities for expatriates, according to the survey, are Bishkek (207), Windhoek (206), and Karachi (205).