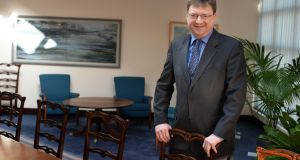 Nick Ashmore of the SBCI: “At the end of last year, we lent a total of €172 million out to SMEs.” Photograph: Dara Mac Dónaill/The Irish Times

With new regulations calling for greater transparency between the banks and small business to come into force this month, here’s a look at the highs and lows of applying for a bank loan.

The story of small and medium-sized enterprises (SMEs) applying for bank loans is one of David and Goliath proportions. Small businesses need to borrow to grow, but the system and the criteria that banks lend upon – based on a long track record, assets and growth projections – often do not line up with the characteristics of your typical small-to-medium business.

This view is reinforced by the decision of the Central Bank to introduce new regulations from today, July 1st, which aim to bring greater transparency to the SME loan application process by introducing rules that ensure an explanation from the banks in the case of a rejection and by expanding the grounds for appeal.

It is clear from the need for such measures that there are obvious problems with the loan application process, stemming from a financial relationship that has been fraught with mistrust, which is partly due to a very rocky recession.

Across the four main banks, the application process for a loan remains the same: talk to your bank manager, put the best case possible forward for the business and then fill in the application on the back of that meeting. The forms are broken down into the business’s financial details, the financial history of the business owner and the details of the loan itself.

If the loan is approved, an approval letter outlining the terms and conditions will be sent out. If a proposal is declined, the bank will explain the main reasons, and if the business owner feels they are unfair, the decision can be appealed at the bank.

If you feel the bank’s review is unfair, you can take your case to the Credit Review Office, where half of all lending decisions are overturned.

Although recent figures from the Irish Small and Medium Enterprise Association (Isme) show that the number of SMEs applying for bank loans and the number of loan applications being approved have been rising, there remains a gap between banks and small businesses. And nowhere is it more apparent than in the figures used to represent approved loan applications. While the banks claim that 90-95 per cent of applications are approved, SME owners say the figure is closer to half of that, at 40-60 per cent.

The disparity can be explained by the first step of the loan application process: “talk to your bank manager.” This step is in place to clear up any misunderstandings, such as on the maximum size of the loan available. But it also may deter some SME owners for applying for a loan “formally” and filling out the application form.

In the eyes of the bank, an application only begins when the application form has been filled in and submitted, along with all required documentation.

Another problem cited by SMEs is that banks often do not understand the best course for an SME to remain viable. Anecdotally, many claim the banks gave them bad advice during the recession and showed a lack of understanding of what was at the heart of their business.

Isme chief executive Mark Fielding says this is due to inexperienced bank staff handling SME applications and advising or rejecting claims based on a “fear of making a mistake”.

Seemingly dealing with this problem head-on, Ulster Bank and Permanent TSB have recently launched teams trained in SME lending. Killian O’Flynn, head of SME banking at PTSB, says this move makes sense due to a number of factors.

“We realised from discussions with customers and representative groups such as the Isme and the Small Firms Association, that SMEs had very specific banking needs that weren’t being provided for elsewhere,” O’Flynn says.

“There was talk about SMEs being afraid to apply for loans for fear of rejection, perhaps because the need for investment might be negatively perceived. It was also said that high-growth businesses, including start-ups, were struggling to find investors or lenders who shared the business owner’s confidence in growth projections or risk appetite; many small business owners also spoke about the lack of understanding displayed by the main lending banks and about the lack of alternative finance providers.”

In some cases, banks may require a personal guarantee to ensure the repayment of their investment, but SME owners often are not willing to put their personal finance on the line for the business.

Neither does it make sense to make a decision that goes so far south that a bank must claim their investment back through Scrooge-like measures. Yet when a personal guarantee is required, it is often the deal-breaker for SMEs.

It is something that Nick Ashmore, chief executive of the Strategic Banking Corporation of Ireland (SBCI), acknowledges as a real problem among SMEs, and one that the SBCI is currently trying to solve. In the next few months, Ashmore is looking to put forward a risk-sharing option, where the SBCI would take some of the risk in certain situations.

“And talking to SMEs, they think that’s not a bad solution. They realise they need some ‘skin in the game’ without putting their whole lives on the line for a loan.”

The existence of the SBCI itself seems a confirmation of the problem that exists between the traditional credit lenders and SMEs. Launched in October 2014, it offers lower interest rates, loans of up to €5 million and alternative lending options (such as leasing) to SMEs.

Despite being developed to counteract the “over-cautious” banks, the SBCI offers its products through AIB, Bank of Ireland and Ulster Bank, as well as various independent creditors. Operating through the banks raised a few eyebrows when it was first announced, but Ashmore says it is the best course of action as the agency’s financial products are sure to reach the largest number of customers that way (although it still remains up to the SME owner to ask the bank for the SBCI product).

“We monitor and track each loan very closely to ensure the discount is being passed on,” says Ashmore. “And the banks are very much incentivised to use the credit. If the bank doesn’t use it, it’s reallocated elsewhere.

“At the end of last year, we lent a total of €172 million out to SMEs, and we’re hoping to come close to doubling that by June. But it’s not a perfect system: large banks’ frontline staff have a lot of products to understand and to sell, and more and more they’re trying to do small loans over the phone, which can be difficult for SMEs.”

For those who have applied for a bank loan and weren’t successful, or those who wish to avoid the banks altogether, there are other sources where they can apply for a loan.

Independent creditors are a greatly-underused option and, much like SMEs, they provide niche products and a personalised service: from First Citizen Finance which leases farm equipment to Celtic Invoice Discounting Ltd and international independent finance providers such as Grenke Leasing. Independent Finance Providers Ireland (IFPI) is a recently launched group that seeks to promote and represent all independent creditors, as there is a general lack of awareness of them as competitors of the banks.

There are also more than 80 government support schemes directly focused on start-ups or SMEs. Microfinance Ireland, for example, is a non-profit body that distributes the Government’s Microenterprise Loan Fund to everything from new to well-established businesses.

Enterprise Ireland also has various funds available, such as the recently released FinTech fund, and the free tool SupportingSMEs.ie, which assesses your business’s basic needs and recommends a list of options available to you, which is a great resource if you’re unsure of where to start.