Minister for Transport says projects are part of ‘long-term vision’, have not been ‘shelved’ 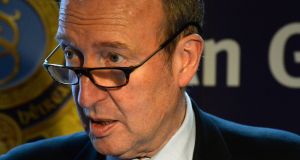 Minister for Transport Shane Ross has said transport projects such as Dart Underground and Metro North have ‘not been shelved’. Photograph: Cyril Byrne/The Irish Times

Expensive transport projects such as Dart Underground and Metro North have “not been shelved” but were “postponed” during the financial crisis, Minister for Transport Shane Ross has said.

Mr Ross said these and other major capital, transport projects “are all going ahead”.

Outlining his department’s “long-term vision”, Mr Ross said in the short term the State would spend €595 million on transport this year.

In the long term the priorities for Government were projects such as Dart Underground and Metro North – “all those projects which have not been shelved but which have been postponed because of the economic crisis”.

“They are all going ahead, they are all part of the vision which we have” Mr Ross told the Oireachtas Committee on Transport.

He told Fianna Fáil’s Robert Troy that such projects required a “huge contribution of long term capital” and invited Mr Troy to “come to me with proposals about how they will be funded”.

“That long term vision is there but let’s be honest about it, it is not going to be achieved over night”, he said.

In relation to rural transport, he said a “sustainable” transport network was the priority. He told the committee there was “no plan” and “no conversations” about privatising Bus Éireann.

He said the company made a presentation on its future plans of which he expressed neither approval or disapproval. He said he had “absolutely no intention” of interfering between the company and the unions at the company on future plans.

Mr Ross also said he had received a review of the State’s railways, carried out by Iarnród Éireann and the National Transport Authority.

He will shortly be announcing his priorities for the railways based on this report, he said.

The wide ranging review of rail operations is understood to have considered the future of little-used lines such as the Limerick to Waterford line and the Ballybrophy branch line , as well as Iarnród Éireann operational matters.