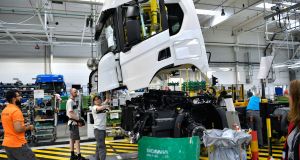 Claims in Ireland could amount to more than €200 million, depending on how many of the hauliers are still in business. Photograph: Mikael Sjoberg/Bloomberg via Getty Images

Thousands of Irish truck owners who bought vehicles between 1997 and 2011 may begin compensation action through the Irish courts against manufacturers after a decision this week by the European Court of Justice (ECJ).

One industry source suggested the claims in Ireland could amount to more than €200 million, depending on how many of the hauliers are still in business.

Hauliers, local authorities and semi-state companies are among groups that may seek damages in Irish courts against Europe’s biggest truck manufacturers over alleged anti-competitive practices.

Record fines totalling €3.8 billion were imposed on the companies. MAN avoided a fine because the company had revealed the existence of the cartel to the commission.

An estimated 40,000 vehicles from these manufacturers were registered in the Republic between January 1997 and the end of 2010, the period during which the commission says the price-fixing cartel was in operation.

The ECJ ruling this week specified that a case taken by an Hungarian logistics company, Tibor-Trans, against DAF Trucks, could be heard in Hungary, even though the price-fixing meetings happened in Germany and vehicles were purchased through an intermediary.

An Hungarian court of appeal had submitted the case to the EU’s top court as it was uncertain of jurisdiction for the lawsuit. The finding means that Tibor-Trans can take its case in Hungary and, according to legal sources, it should result in Irish cases for damages being heard in courts here as well.

The EU commission said its investigation, which began in 2011, found the truck makers had colluded for 14 years on pricing and passing on the costs of compliance with stricter emission rules to their customers.

It said it found the manufacturers had co-ordinated prices at a gross level for medium and heavy trucks in the European Economic Area and passed on to buyers the costs of emission technologies required to comply with strict European emission standards.

As a result of the investigation’s findings, dozens of Irish hauliers, represented by Paul McGarry SC, Roderick Maguire, and solicitor Evan O’Dwyer, have taken separate actions for damages to the High Court over alleged breach of Irish and EU competition laws.