Bus routes which could be privatised are advertised 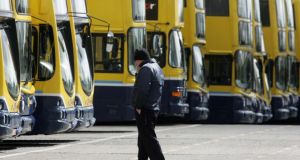 Details of 28 Dublin Bus and Bus Éireann routes that could be privatised have been made available to prospective new bus operators.

The National Transport Authority has advertised 23 routes currently operated by Dublin Bus, and five Bus Éireann routes to and from Dublin, for which it will be seeking bids.

The Government plans to open up 10 per cent of public bus routes to the market, despite opposition from unions representing transport workers, which have warned of industrial action if privatisation goes ahead.

Talks between the National Bus and Rail Union, Siptu, the transport authority and management from both bus companies are ongoing at the Labour Relations Commission, with the next round of negotiations set for Monday.

The routes have been advertised in two separate lots, one relating to the 23 Dublin Bus routes and the other for the five Bus Éireann routes.

Companies can express an interest in either or both routes, but for each route, a single operator is being sought rather than multiple operators. Interested companies must complete a questionnaire by April 17th to be considered for the bidders’ list.

The 23 Dublin Bus routes are currently serviced by 88 double-deck buses at peak times, and carry about nine million passengers a year.

None terminate in the city centre and are primarily orbital routes, or services carrying commuters from rail stations or large shopping centres to suburbs.

The five Bus Éireann routes are all Dublin commuter services, primarily from Kildare to Dublin city centre. Four of the routes serve Naas, with one of the buses extending to Athy and another to Portlaoise. The fifth service is an Offaly to Dublin route, running from Tullamore to Edenderry to Dublin.

The five routes are currently serviced by 28 coaches, with about 1.2 million passenger journeys taken a year.

The authority expects to offer a five-year contract with a possible two-year extension to the successful bidder for either lot. The contracts might not be awarded to private bidders, as Dublin Bus and Bus Éireann will be permitted to tender to keep the routes.

17a Blanchardstown Centre to Kilbarrack

33a Swords to Balbriggan

33b Swords to Portrane

76 Chapelizod to Tallaght (The Square)

76a Blanchardstown Centre to Tallaght (TheSquare)

1 Whistleblower warned EY of Wirecard fraud four years before collapse
2 Subway bread too sweet for the Irish tax authorities
3 Google tells workers to return to country where they are employed
4 Irish food trade could slide by one-third if EU and UK fail to cut deal
5 The Devlin hotel operator sues insurer over Covid losses claim
6 Ten of the most mysterious aircraft disappearances
7 Will tracker mortgage be at risk if Ulster Bank closes?
8 New car prices could rise by up to €10,000 if taxes increase in budget
9 Roll up, roll up: capitalism will drive cannabis legalisation in Ireland
10 Green energy firm Gaelectric for sale as Chinese investors withdraw
Real news has value SUBSCRIBE