First major port to be 100% privately owned in State 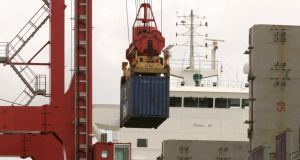 Greenore is strategically located next to the Dublin-Belfast economic corridor, so it is capable of servicing both cities

Burke Shipping Group, the principal operating subsidiary of the family-owned Doyle Group, has acquired Greenore Port in Co Louth. The port was previously jointly owned by One51 and the state-owned Dublin Port Company.

The price Burke Shipping paid for the port is not known but it is thought to be in the region of €5 million. Burke did not respond to requests for comment.

The company, which employs 300 people and has offices in all major Irish ports, is understood to plan to invest a substantial sum in improving Greenore. It will be the first significant port to be entirely privately owned in the Republic.

Burke Shipping plans to target the container and bulk shipping market and compete with the Dublin Port Company and other ports for this business.

Greenore is strategically located next to the Dublin-Belfast economic corridor, so it is capable of servicing both cities.

Burke Shipping is owned by Connor and Frank Doyle, whose grandfather founded the original company DF Doyle Stevedoring in 1886. The company is led by Brian McCarthy who has worked with the company since 1980, and been chief executive since 2006.

Greenore port’s potential has been recognised by An Bord Pleanála, which has described it one of Ireland’s “critical infrastructure assets.” The Port was owned equally by One51 and the Dublin Port Company via a company called Renore Ltd. This was set up to buy the operations of the port in April 2002. The sale was handled by IBI Corporate Finance.

In November Burke Shipping announced that it was investing further in its container terminal in Dublin Port by investing in a new rubber tyred gantry (RTG) crane used to move containers, bringing to seven its total RTGs in Dublin. In total it said it had invested €30 million in Dublin Port.

The Doyle family was previously involved in a consortium with One51, then led by businessman Philip Lynch, which unsuccessfully tried to buy Irish Continental Group, the owner of Irish Ferries.