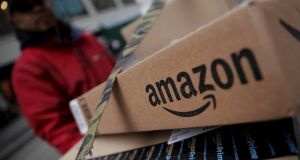 Amazon boxes stacked in New York: stock markets have been an excellent long-term investment is because of the huge returns generated by a tiny minority of superstocks such as Amazon. Photograph: Mike Segar/Reuters

Amazon recently celebrated its 20th birthday as a public company. And what a birthday it would have been if you’d bought shares back when the company debuted on the stock market back in 1997 – a $1,000 investment back then would be worth about $1 million today.

For investors, it’s the stuff of fantasies, and there’s been no shortage of commentary offering advice for those looking to bag the “next Amazon”. The main lessons from the Amazon story, according to some, is to hold on to top companies through thick and thin, and not to be put off by seemingly pricey valuations.

“There’s another Amazon out there, somewhere, being started today,” said blogger and portfolio manager Eddy Elfenbein. “Think differently and you just might find it.”

In truth, there are lessons to be learned from Amazon’s extraordinary rise, although they are not what one might think. Amazon illustrates how we are codded by hindsight bias; how you need an extremely diversified portfolio if you want to capture market returns; how it is nigh-on impossible to pick tomorrow’s big winners; and how difficult it is to hold tight when share prices turn south.

You’ll find plenty of examples of hindsight bias, or the “knew-it-all-along” effect, on online forums. In a recent Boards.ie thread, one poster said he felt “like a complete and utter muppet” for not “piling into” Amazon years ago, adding: “I knew it would come to this and still didn’t do it.”

Things often seem inevitable after the fact, but it’s never that simple. Back in the late 1990s, there was plenty of excitement about Amazon, but investors thought the future was similarly orgastic for the likes of AOL, Yahoo, Netscape, Lycos and Excite.

Prior to the internet, investors’ “if only” conversations tended to revolve around what it would have been like to get into computer stocks in the early 1980s, getting rich on the likes of Apple and Microsoft. As investment author Jason Zweig points out in Your Money and Your Brain, it wasn’t that straightforward.

Microsoft, he points out, didn’t go public until 1986, and no one knew it would go on to dominate the industry. Instead, the big names of the time included now forgotten companies such as Burroughs, Commodore, Computervision, Cray Research, Prime Computer and Wang Laboratories.

You could have bought Apple as early as 1980, Zweig notes, but perhaps you might have thought the future belonged to Commodore instead; it was the Amazon of its time, turning a $10,000 investment in 1974 into $1.7 million in 1980. The early stars “winked out one by one”, says Zweig, wiping out their enthusiastic investors. “It was never clear which companies would win the race until the race was well under way.”

Trying to find tomorrow’s biggest winners is almost impossible. The vast majority of stocks underperform stock markets. Indeed, a recent study, Do Stocks Outperform Treasury Bills?, showed that, historically, most stocks have failed to keep up with inflation. The reason stock markets have been an excellent long-term investment is because of the huge returns generated by a tiny minority of superstocks such as Amazon.

If you have a concentrated portfolio, it’s very unlikely to contain the few big winners that drive overall index returns. As a result, even a portfolio containing 25 stocks has a 64 per cent chance of underperforming the overall market.

As for valuation, it’s true Amazon has defied those who protested for years that the stock was hugely overpriced. Amazon has never paid a dividend. It’s been unprofitable for most of its history. On average, it has traded at more than 200 times earnings over the last 20 years, and currently trades on 180 times trailing earnings.

However, is this really evidence investors should not “be tied to valuation metrics”, as Eddy Elfenbein has suggested? What about Baltimore Technologies and Pets.com and all the other insanely overpriced dotcom stocks that ultimately died early deaths?

Some growth stocks manage to justify their seemingly exorbitant early valuations, but most prove to be disappointments. Historically, the cheapest quintile of US technology stocks have generated average annual returns of 14.5 per cent, compared to just 3.5 per cent for the most expensive companies.

Just as it would be unwise to deduce it’s safe to drink 10 pints of beer and drive home on the basis that you’ve done so in the past, it’s imprudent to look at Amazon and conclude that it’s therefore safe to buy expensive stocks.

Similarly, Amazon’s extraordinary 20-year run is not proof that big returns will follow if you simply hold on through good times and bad. “Buy and hold” represents excellent advice for anyone with a diversified portfolio, but it’s less relevant for individual stocks. Most stocks, as noted earlier, fail to keep up with inflation; roughly half will end up losing money, irrespective of how long they’re held.

More importantly, don’t underestimate how difficult it is to hold on to even the best stocks during difficult market environments. Amazon has fallen into bear markets (declines of at least 20 per cent) in 16 of the last 20 years, with the average drawdown being 36 per cent. The worst such decline occurred during the dotcom crash, when Amazon fell from a peak of $113 to $5.51 – a fall of 95 per cent.

Many felt the stock would not survive, with Lehman Brothers warning of Amazon’s “weak balance sheet, poor working capital management, and massive negative operating cashflow – the financial characteristics that have driven innumerable retailers to disaster through history”.

You’d have had to wait until late 2007, when the stock climbed back up to $101, to come close to breaking even. Then, another collapse ensued; by late 2008, the stock had lost two-thirds of its value, falling all the way back to $34. Amazon didn’t reclaim its dotcom era high until late 2009 – a 10-year wait.

Would you have had the stomach to hold on? The likelihood is there’s only one investor who held on to their Amazon shares for all of the last 20 years – chief executive Jeff Bezos. Everyone else surely got shaken out somewhere along what was an extraordinarily nerve-racking ride.

Is it really realistic to think one could have identified Amazon from the hundreds of online competitors back in the late 1990s, ignored the persistent warnings of overvaluation over the following two decades, and somehow shrugged off the multitude of nausea-inducing drawdowns that accompanied the stock?

Not only would have it been incredibly difficult to find the needle in the haystack, it would have been some job to hold on to the needle once one had it. It’s all very well to fantasise abut what it would have been like to get rich on Amazon stock over the last 20 years, but the stock’s history is proof most investors are better off heeding Vanguard founder John Bogle’s oft-repeated advice – just buy the haystack.