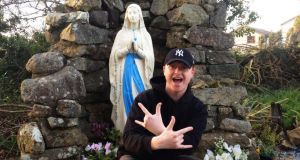 With headlines such as “Ryan Tubridy Found Dead Inside”, “Michael Bay to Direct 1916 Rising Movie” and “Jesus Not Coming Back By the Looks of It, Admits Vatican”, Waterford Whispers News is increasingly capturing the interest of Irish readers looking for satire of The Onion variety.

The Tramore-based site, run by Colm Williamson, will now be represented to advertisers and agencies by the independent publishing stable Sweatshop Media.

Williamson, who founded Waterford Whispers News in 2009, had been relying on the Google AdSense programme for revenue, but in recent months had received approaches from a number of Dublin-based agencies.

“I decided Sweatshop was the right fit. They seem to be more concentrated on the site itself instead of just pawning off ‘page impressions’ to any old advertiser,” he says.

Web traffic at Waterfordwhispersnews.com has multiplied in recent months and in April the site’s monthly unique users neared 800,000, with page views clocking in at 1.7 million.

These traffic numbers can be substantially boosted if even a single article goes viral. An item headlined “The 5 Shocking Jay Z and Solange Pictures You HAVE to See” attracted interest in the US last week, with page views topping 2.5 million. The article parodied a breathless celebrity-obsessed media style and married this with images from Nigeria’s Boko Haram crisis, to form a pointed criticism of western news values.

Sweatshop Media was set up last year by Ciaran Walsh and Michael McDermott, who own the Le Cool franchise in Ireland and have also acquired The Prowlster, a fashion, design and culture start-up, from sisters Jennie, Sarah and Grace McGinn.

The digital advertising agency and content marketing company also acts as an advertising sales representative for Broadsheet.ie (billed to advertisers as “a satirical news source for the bewildered”), music site Nialler9. com and Thread magazine, a bi-annual print publication described as a platform for the Dublin creative sector.

It can take a “brave” company to promote itself on edgy satirical sites, according to Walsh. “We are trying to find advertisers that are not afraid of the tone of Waterford Whispers News and Broadsheet.ie.”

As rivals such as Journal Media and Maximum Media chase what Walsh calls “the Heineken spend” – the advertising budgets of the mainstream brands – Sweatshop’s strategy will be “to go after the craft beer spend”. An advertiser such as bookmaker Paddy Power would be “a very easy fit” with Waterford Whispers News, he suggests, and talks are under way.

Williamson has increased his focus on the site’s potential international audience ever since his take on Michelle Obama’s visit to Ireland last June went viral.

“We’re building up a steady audience abroad and are in talks with a couple of Irish ex-pat websites who are based in the US about sharing the WWN content,” Williamson says, adding that he’s “releasing a book for Christmas too”.