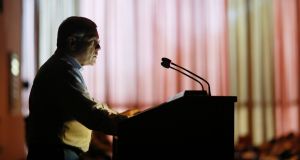 A third of investors in Martin Sorrell’s WPP failed to back the advertising boss’s £70 million pay package on Wednesday, one of the biggest payouts in British corporate history.

Mr Sorrell, who built WPP from a two-man operation in a London office to one that now dominates the industry with around 194,000 staff in 112 countries, has said the scheme reflects his firm’s rapid growth in recent years.

The 71-year-old has made headlines before for his large payouts and the bulk of the 2015 package for the chief executive came from a long-term scheme called Leap which has now been modified.

Excluding abstentions 33.5 per cent of investors did not support the remuneration deal but the vote was not binding.

The company’s remuneration policy will now face a binding vote by shareholders at next year’s annual meeting and under the firm’s new scheme Mr Sorrell’s pay is set to fall next year.

Asset manager Hermes, a WPP shareholder, said before the vote that it would be unable to support the remuneration packages, in part because of “historic concerns about board composition and the remuneration committee’s apparent lack of vigour and stress-testing”.

The WPP annual meeting comes amid a resurgence of investor activism against excessive boardroom pay. In April, BP shareholders voted against chief executive Bob Dudley’s $20 million pay deal for 2015 after the company made a record annual loss.

On Wednesday, it said that during the first four months of 2016 its net sales, profits and revenues were “well above budget” and up on last year.