Integration of Irish Life over past year a success, says Great-West Lifeco CEO 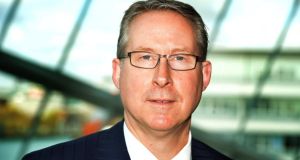 Great-West Lifeco chief executive and president Paul Mahon: said company never saw its Irish Life deal as a “bet” on Ireland, given that the country was still in a bailout programme with the EU and International Monetary Fund at the time of the acquisition. Photograph: David Sleator


The integration of Canada Life and Irish Life has “gone well” since the two businesses began their merger last year, the chief executive and president of parent group Great-West Lifeco said yesterday.

Paul Mahon, who was in Dublin yesterday to speak at a breakfast seminar hosted by European Movement Ireland, said it was difficult for the Canadian financial group to ditch the Canada Life brand here, given it had been in this market for more than 100 years.

“[ But ] it’s not often that you can brand your company after the country you exist in,” he added.

Great-West Lifeco acquired Irish Life in July 2013 from the State for €1.3 billion. Irish Life was the clear marker leader at the time, while Canada Life only had a small share here.

Mr Mahon said Irish Life is on target to achieve the €40 million in cost savings by the middle of 2015 that were targeted at the time of the deal last year.

“We continue to be on target for that,” he said, adding it was “on time and under budget”.


Investment of €60m
Great-West Lifeco is also investing €60 million in Irish Life to enhance its systems and processes, and to position the business for growth as the economy continues to recover.

Mr Mahon said there had been no client losses since the integration began. “But it’s early days. We’ve only been at this for nine months and it will take the better part of 20 to 24 months. The proof will be in the pudding and we would always model some client loss. If we remain focused on customer service . . . then we’ll be well-positioned to retain clients.”

Mr Mahon said Irish Life has increased its market share to 34 per cent since its acquisition. Irish Life contributed €31 million to Great-West Lifeco’s earnings in the fourth quarter of last year, and Mr Mahon said it represents about 10 per cent of the group’s overall business.

He said staff numbers would grow as the business develops. “It’s an acquisition about how can we grow our business here,” he explained.


Vote of confidence
Mr Mahon said Great-West Lifeco never saw the Irish Life deal as a “bet” on Ireland, given that the country was still in a bailout programme with the EU and International Monetary Fund at the time of the acquisition. “We felt there was a higher probability [ in Ireland ] of recovery because of the resilience of the people. This was not opportunistic – it was very much strategic.”