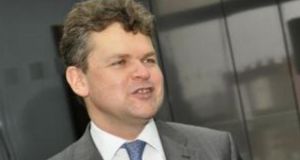 Basil Geoghegan: adviser on options available to save Irish Nationwide at time of bank bailout.

Geoghegan said what most people here have been thinking for a number of years, namely that the blanket bank guarantee issued by the State in late September 2008 by the Fianna Fáil government was madness. His comments carry added weight given that he had an advisory role at the time with Goldman Sachs (he now works for US bank Citi).

As an adviser on the options available to save Irish Nationwide, which like the other Irish lenders at the time was on the brink of collapse, Geoghegan was in the room, so to speak, when the fateful decision was made, although he wasn’t directly advising the Government.

His point that the decision was compounded by the European Commission’s insistence that it amounted to state aid is well made.

Ireland’s solo run on the guarantee left us with few friends in Brussels or Berlin, London or Paris at the time.

This led to AIB, Bank of Ireland and Permanent TSB having to submit restructuring plans that eventually involved them having to sell much of the family silver in order to get the green light from the Commission. In fact, PTSB is still waiting for that approval and arguably has been worst hit by the decision to separate it from Irish Life, which was sold last year to Canada’s Great West-Lifeco for a snip at €1.3 billion.

If anything, the guarantee turned out to be a bailout of other institutions in Europe, with the banks here left treading water for five years.

Geoghegan’s point was that these divestments robbed the banks of valuable fee income, a vital component when trying to restore profitability and build a capital buffer to satisfy regulatory demands.

“So they are now all focused on net interest margin,” Geoghegan said. That’s a tough slog in the current low interest rate environment, especially with the funding drag of tracker mortgages, which is particularly acute in the case of PTSB.