Tom Browne would not have taken out loans if he knew about group’s holding, court told 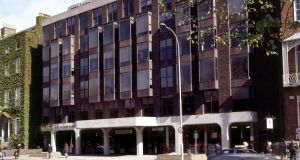 Anglo Irish Bank: Tom Browne is being sued for debts by the special liquidators of Irish Bank Resolution Corporation which took over Anglo.

Former Anglo Irish Bank executive Tom Browne claims if information had been disclosed in late 2007 about the Quinn group’s holding in the bank he would not have taken out significant loans over which Anglo’s successor is suing him.

Mr Browne is being sued by the special liquidators of Irish Bank Resolution Corporation (IBRC), which took over Anglo, for debts, including more than €12 million on an investment property in Bishopsgate, London, which it is claimed he owes.

Mr Browne is counterclaiming and alleges, among other things, the non-disclosure of the Quinn involvement was fraudulent misrepresentation through silence. He said he is entitled to rescission of the loans and they are invalid by reason of that alleged misrepresentation.

At the Commercial Court on Wednesday, Mr Justice Brian O’Moore began hearing Mr Browne’s counterclaim against IBRC. IBRC denies his counterclaim and has been seeking judgment against him since 2010, but the case has had to be deferred because of criminal trials involving a number of other former Anglo executives.

In opening the counterclaim, John Rogers for Mr Browne said his client was at one point a contender for Anglo chief executive but said he decided to leave when passed over in favour of later jailed chief executive David Drumm.

He had effectively left the bank in September 2007 although it was agreed with Mr Drumm and chairman Seán Fitzpatrick, who has since been tried and acquitted in a criminal trial over Anglo, that no announcement would be made until December, counsel said.

Between September and December 2007, senior Anglo executives knew of the unlawful loans of some €650 million made to the Quinn group including for the purpose of funding what was Quinn’s more than 25 per cent de facto holding in Anglo through an investment arrangement known as contracts for difference (CfD), Mr Browne said.

Turmoil in the stock market, culminating in the eventual collapse of Anglo’s shares (and its subsequent nationalisation) had led to Anglo seeking to get Quinn boss Seán Quinn to reduce the group’s holding in the bank which under regulation could be no higher than 25 per cent.

Mr Browne said that even though Anglo had always sought security from Quinn for the group’s aggressive worldwide property acquisition between 2001 and 2007, it did not seek it when it provided loans to fund the Quinn CfD arrangement which required the group to make payments every time the Anglo share price fell.

Mr Browne said it was subsequent to September 2007 that he entered into loan arrangements for various investments using his shares in Anglo as security and which he had no reason to believe were in imminent danger of collapse, something which subsequently happened.

In lending money to him, Anglo noted he had a net worth at the time of some €60 million. The primary acts of wrongdoing on Anglo’s side in relation to the Quinn group and in relation to Anglo’s funding of unsecured loans to help shore up the share price by another 10 investors – known as the Maple 10 – pre-dated when Mr Browne exercised his options, amounting to almost a million shares, and he relied on them as security on loans.

If that information had been made public at the time, it would have rendered Anglo shares worthless, he said. Had he been aware of these matters, he would not have engaged in any further borrowing with Anglo or any other institution.

Mr Browne said the information in relation to Quinn was known by Mr Fitzpatrick and Mr Drumm, who held meetings at that time with Mr Quinn over his shareholding, but that was not known to stockholders such as he was at that time, and he was no longer part of Anglo.

He said he made sound decisions to borrow for investment based on his share options and their value. In 2010, after Anglo was nationalised, he was served with a demand for repayment of the loan for his Bishopsgate property.

Even though this borrowing was being served, he said it was called in by reason of a “cross-default mechanism” which entitled the bank to move in relation to his loans. Failure to repay gave rise to the proceedings in 2010 seeking judgment against him.