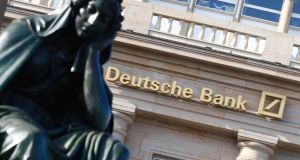 Deutsche Bank ended a 12-year battle with the heirs of media mogul Leo Kirch today, closing one of Germany’s most acrimonious corporate disputes in a deal costing the country’s largest lender about €925 million.

Mr Kirch, who died in 2011, blamed the bank for his group’s demise.

The deal takes Deutsche a big step closer to its near-term goal of settling its large amount of claims, investigations and fines that have proved an expensive distraction while management have been under pressure over the financial crisis.

Joint chief executives Anshu Jain and Juergen Fitschen promised to conclude most of these “legacy issues” as they reshape the bank to meet more stringent regulatory demands and tougher markets.

“We intend to make further progress in this regard, step by step, throughout 2014,” they said in a statement.

The settlement brings to about €6 billion the amount that Deutsche has paid in fines and claims in 2012 and 2013 and will take a chunk out of the €2.4 billion in reserves set aside last year to deal with future such problems.

Deutsche Bank will charge for the settlement in its 2013 results, pushing it about €350 million deeper into loss after tax and bringing its net loss to about €1.3 billion in a fourth quarter already hit by heavy legal and regulatory costs.

The settlement includes a payment of €775 million plus interest and a lump-sum reimbursement of costs.

“We welcome the settlement. We would have liked to see it concluded during the lifetime of Leo Kirch. The damage caused by Deutsche Bank was significantly greater than the settlement,” said a spokesman for the Kirch family.

Mr Kirch had claimed that ex-Deutsche chief executive and later chairman Rolf Breuer triggered his media group’s downfall by questioning its creditworthiness in a 2002 television interview. Mr Kirch sought for years to recoup about €2 billion in damages.

In 2002, while he was participating in the World Economic Forum at New York’s Waldorf-Astoria hotel, Breuer appeared to raise questions about Kirch Group’s creditworthiness during a TV interview.

Breuer was also then chairman of Germany’s private-sector bank association. Mr Kirch argued that the comments amounted to a signal for other creditors to discontinue funding.

The family later argued that the statement was part of a deliberate scheme to force Kirch into bankruptcy, whereby the bank could reap hefty fees helping the group to restructure.

Deutsche Bank and its executives have denied that Mr Breuer’s comments led to the collapse of the Kirch empire.

But the case has occupied lawyers, the courts and the media for years, with Germany’s constitutional court getting involved at one point, and has led to a number of additional lawsuits or criminal investigations.

In 2012, hundreds of armed police swarmed Deutsche’s headquarters to seize data as part of an investigation into whether the bank had attempted to hide facts related to the Kirch case.

Following today’s settlement, a Munich court said that the Kirch family had withdrawn its complaints against Mr Breuer and the bank.

In a sign that former CEO Breuer may seek a separate settlement, Deutsche Bank ended its relationship with law firm Hengeler Mueller, who had represented both in the case.

The case, however, still represents some risk for Mr Fitschen. Munich prosecutors launched a separate criminal investigation in November into whether he gave misleading evidence.

The Munich prosecutor said yesterday that a settlement could help mitigate any penalty Mr Fitschen could possibly face if he were ever charged in the investigation.

Deutsche Bank has said it is sure that Mr Fitschen would be cleared.