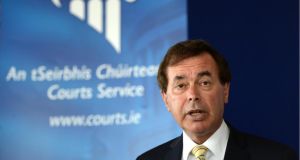 The Government has been urged to reconsider new courts legislation that, it is feared, would lead to unintended increases in insurance costs and clog up the courts even further.

The Irish Brokers Association yesterday said the Courts Bill, which is due to come before the Dáil today having been passed in the Seanad last week, will end up costing consumers approximately 30 per more in premiums.

Minister for Justice Alan Shatter has said the existing monetary limits have rendered the District and Circuit Courts redundant in respect of some classes of civil proceedings.

However, the brokers group believes the measure will have unintended consequences for the insurance industry. Association chief executive Ciaran Phelan said only a small percentage of insurance claims went to the High Court because of the costs involved. The low limits in the two lower courts meant a lot of cases were settled. The proposed changes, if introduced, would see thousands of extra cases reach the courts each year, increasing legal costs for insurers, which will have to be passed on to consumers.

The Law Society has also come out against the measure. President of the society James McCourt said he had “grave concerns” about the measure, which he said would increase the workload of the two lower courts at a time when the allocation of increased resources appeared unlikely.

The proposed law, he said, will probably increase delays not just for civil cases, but also for criminal and family law matters as resources are directed towards dealing with the increased civil caseload.

Dorothea Dowling, chair of the Injuries Board, said there was a real danger of the law of unintended consequences causing the Bill to reverse declines in the cost of insurance and contributing to increases of approximately 30 per cent.