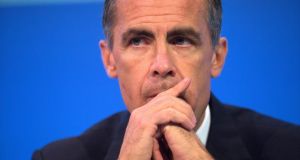 The Oireachtas banking inquiry has sought board minutes and other internal records stretching back more a decade from the Central Bank. The inquiry’s request comes as newly released Bank of England minutes from 2008 show that Ireland’s bank guarantee was blamed in London for bringing global interbank lending to a standstill after the Lehman bankruptcy.

“Actions announced first by the Irish government and then the German government were both unclear and unco-ordinated and led effectively to a ‘beggar thy neighbour’ policy which froze the international banking system,” said a Bank of England minute from October 2008, a fortnight after the guarantee.

The records of the Bank of England court of directors – its board – were published on foot of a transparency drive by its governor Mark Carney. The release of hundreds of pages of records from 2007-09 follows demands from MPs, who are scrutinising how the Bank of England grappled with the crisis.

The British documents emerge as the Oireachtas inquiry awaits records from the Central Bank, one of several institutions to which it sent a request for documents in the days before Christmas.

The panel of TDs and Senators will conduct a public hearing next Thursday with Central Bank governor Patrick Honohan, its third witness. It is seeking the board records of the Central Bank from the late 1990s until 2013 ahead of hearings with political figures, bankers and regulators.

The Central Bank worked under various legal mandates in that time. Board appointments records and board subcommittee minutes were also sought.

In his 2010 report on the crash, Prof Honohan found that Central Bank minutes and those of then financial services regulatory authority typically recorded “only the broad consensus” on issues discussed and decisions taken.

“They do not describe in any detail the frequent debates and often significant differences of opinion that, according to board and authority members interviewed for this report, existed on some issues, especially the possible risks to financial stability,” he said.

The Bank of England records point to disarray on its board, with directors in the dark about the extent of problems in Northern Rock at the outset of crisis.

Scant reference is made to Ireland – the only mention of the guarantee is in a minute on October 15th, 2008, two weeks after the intervention to underwrite all debts of Irish banks.

“It was noted that the past month had been traumatic for financial markets and the banking system. In the US, Lehman Brothers had failed, Merrill Lynch had been sold and AIG had been taken into quasi-public ownership,” it said.

“These events had illustrated that the crisis had become much more serious. It was suggested that the failure of Lehman Brothers would be viewed as the date that triggered the crisis but it was not the underlying cause.” The Irish guarantee was cited as an example of the lack of international co-ordination, which “proved to be as much a trigger for the crisis” as Lehman.

“One of the maxims of the central banking and regulatory community over the past decade had been that no institution was too big to fail, but it was apparent that some were too large to wind down in an orderly way. Attempting to do that had tipped the system into the final throws [sic] of a crisis.”

A quarterly financial stability report in a minute on February 12th, 2009, said the position of the Irish banks in Britain was one of two particular areas of focus. This involved “intensive monitoring and contingency planning”.