Unemployment at six-year low of 9.5% despite monthly rise 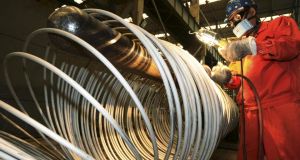 Unemployment rose slightly last month for the first time in over two years.

Official figures from the Central Statistics Office (CSO) suggest the number of workers classified as unemployed increased by 400 to 206,500 in August.

The rise broke a series of 26 consecutive monthly falls stretching back to April 2013.

The overall unemployment rate, however, remains at a six-year low of 9.5 per cent, unchanged from the previous month and down from 11.4 per cent this time last year. The CSO figures also point to an annual decrease of 32,200 or 1.6 per cent, suggesting the underlying trend remains positive.

The monthly change was blamed on a rise in Live Register claimants. From July, new age limits for the One-Parent Family Payment came into operation resulting in about 2,800 additional claims for Jobseekers Allowance, which is covered by the Live Register figures. The CSO’s unemployment estimates are primarily based on the Quarterly National Household Survey but take into account changes to the Live Register.

As the Government pointed out recently in its Spring Economic Statement, he said, the recovery has been jobs rich with 95,000 jobs added from the low point in 2012 .

“The Department of Finance is projecting that Ireland will pass the two million people in employment mark next year, replace all of the jobs lost during the downturn by 2018 and, in total, between 2015 and 2020, add 200,000 new jobs.”

Davy analyst David McNamara said despite the monthly rise the labour market was “in rude health” compared to last year.

“Looking ahead, most employment surveys point to strong jobs growth in the second half of the year, while wage inflation is now emerging,” he said.

Mr McNamara also said the unexpected fall in euro zone unemployment to 10.9 per cent provided encouraging signs that the recovery in Europe had continued over the summer months.