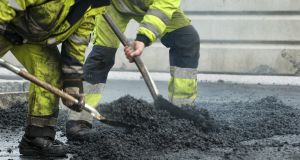 Unite has suggested that the current minimum wage of €9.15 per hour should be replaced by a living wage of €11.45 per hour. Photograph: Getty Images

Ireland is a low pay economy with high levels of income inequality compared to other prosperous countries, according to a report published by the Unite trade union.

Research contained in The Truth About Irish Wages study indicates that low-paid employees comprise a disproportionately large percentage of the Irish workforce compared to other rich EU countries, with almost a quarter of Irish workers in low-paid jobs.

The study drew on publications from Eurostat and the Organisation for Economic Co-operation and Development. It revealed that Ireland has the second-highest level of earnings inequality between rich and poor across an EU-15 group which includes western continental and Nordic countries.

Ireland has some of the highest Gross Domestic Product and Gross National Income per capita figures in the EU-15 grouping and Irish workers also have above average levels of income.

However, our employee compensation figure for 2015, which takes into account social insurance and other payments from employers not directly tied into the basic wage, was €28.70 per hour – €2 per hour less than the EU-15 average.

The figures collated by Unite indicate that while workers in the ICT, electricity and gas sectors are paid comparatively well, Irish retail and hospitality employees are among the worst remunerated in western Europe when it comes to overall compensation.

Unite has suggested that greater collective bargaining rights are needed for Irish workers in order to rectify the situation, and that the current minimum wage of €9.15 per hour should be replaced by a living wage of €11.45 per hour.

The union represents about 35,000 workers in the Republic of Ireland, 6,000 of whom are employed in the public sector.

“There will be a lot of people saying, ‘I thought we were doing okay versus the average’ or ‘I thought it was better’ ”, said Unite regional secretary Jimmy Kelly.

“People are going to have to change their narrative and accept this [report] . . . I think there will be a lot of denial if not surprise,” he added, but said he is not confident that the Government will introduce a suitably effective system of collective bargaining.

“Fine Gael were the main reason for diluting what the trade union movement needed [the previous] government to do, and the Labour Party had to go in a direction that would be favourable to Fine Gael interests. So we ended up with something that’s not really true collective bargaining.”

Such demands have been opposed by the employers’ organisation Ibec which has repeatedly urged decision makers to resist calls for increased wages so as to maintain prudent economic management as well as the State’s international competitiveness.