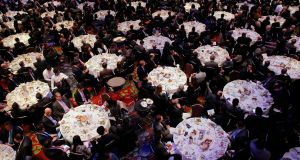 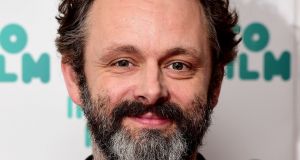 Image of the week: At the Club

It’s a sea of suits, most of them male, and they’ve got food on the table but they’re all distracted by something else – checking their phones, working on laptops, taking notes with old-fashioned pen and paper... and listening. Who could they possibly be paying attention to? It will help to know that these are all members of the Economic Club of New York and the rock star about to address its gathering is the chairwoman of the Federal Reserve chair Janet Yellen, who expounded on her fears for the global economy. If you’re looking at this image digitally, you might be able to spot that the carpet is patterned with a different type of economic nightmare: bubbles.

The 2015 pay package of Sundar Pichai, chief executive of Google since last October. “It just makes you think, doesn’t it, that we chose the wrong path,” BBC business presenter Aaron Heslehurst noted sagely to his co-anchor.

Sum that Alphabet executive chairman Eric Schmidt received in compensation in 2015, down from $108.7 million in 2014 when he got more than $100 million in stock awards. Humans shouldn’t worry about robots taking over their jobs, Schmidt assured us this week.

“Symbolic” annual salary that Google cofounders Larry Page, chief executive of Google’s holding company Alphabet, and Sergey Brin, Alphabet’s president, have taken for some years now, on account of owning a decent chunk of the equity and already being multibillionaires.

There’s a “global commerce in compassion”, writes Thomas Frank in his new book Listen, Liberal, an indictment of the US Democratic Party’s failure on the social justice score. People like Archbishop Tutu, Bono and Angelina Jolie travel about an “international virtue circuit” where they radiate goodness in the company of politicians, billionaires and bankers.

Their audience are buyers of “liberalism offsets”, which Frank defines as “an ideological version of the carbon offsets that polluters sometimes buy in order to compensate for the smog they churn out”. Institutions such as the Clinton Foundation, he says, operate “an unregulated virtue exchange” in which “representatives of one class of humanity ritually forgive the sins of another class”. Sounds like a good book, right?

Getting to know: Michael Sheen

Welsh actor Michael Sheen was well known earlier in his career for playing a number of real-life individuals, including Tony Blair, but his starring role this week has been as himself.

Sheen has been calling on the UK government to “do all they can” to support steelworkers in Port Talbot, south Wales, who are at risk of losing their jobs after an announcement by Tata Steel that it plans to offload its steel business and pull out of the UK. “It’s incredibly frightening in terms of what the repercussions are going to be,” says Sheen, who is from the area, and expects Tata’s decision will have a “domino effect” for a whole region already blighted by austerity. Half of those experiencing the effects of poverty are from those households that are currently in work, he notes: “It’s not the most affluent of towns.”

Fairygodboss is an awful name for a cool idea: an anonymous online job review site similar to Glassdoor, but compiled by women for the benefit of other women. So at which technology companies were women employees happiest? Hint: it wasn’t Amazon.

1Apple: Some 79 per cent say they would recommend the company to other women, with 75 per cent believing that women were equally treated. Apple practices “gender-agnosticism”, says one happy reviewer.

2Salesforce: Three-quarters would recommend it, though only 58 per cent believe women employees are equally treated, and one reviewer describes a recent equal pay initiative that made headlines as a “stunt”.

3 Cisco Systems: Reviewers cite its flexible working culture as an advantage. Unlike some tech companies, Cisco is not afraid of teleworking.

4 Microsoft: The individual experiences of women can be “extraordinarily dependent” on one’s manager, writes one reviewer.

5 Google: The bad news for any woman suffering from internalised sexism is that “iron-clad self-esteem” is an unofficial but unsurprising CV requirement.