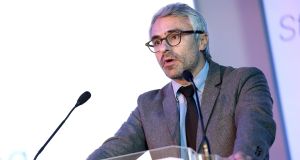 Pascal Saint-Amans, director of the OECD centre for tax policy and administration.

The introduction of tax measures such as so-called knowledge or patent boxes are not a good way to foster the creation of intellectual property (IP), a leading global tax expert has warned.

The head of the Paris-based OECD’s centre for tax policy, Pascal Saint-Amans, told a conference organised by the Irish Tax Institute in Dublin on Thursday that such measures did little to incentivise companies.

Ireland introduced an OECD-compliant Knowledge Development Box in the Finance Bill, which results in a reduced corporation tax rate of 6.25 per cent for eligible technology and software firms.

The new corporate tax scheme was widely seen as a move to shore up inward investment after the outgoing government’s decision to scrap the controversial “Double Irish” mechanism.

“What we have said is that if you decide to have a policy that may not be smart but that is your sovereignty then do it in a proper manner that will not take the tax base from your partners in an unfair manner,” Mr Saint-Amans told the conference.

Patent boxes have been in existence for some time but the OECD’s Base Erosion and Profit Shifting (Beps) project, has seen the approach being more widely developed.

Speaking at the Global Tax conference in Dublin, Mr Saint-Amans, who was introduced to delegates as “the Ronaldo of the tax world,” also said that implementation of BEPS was progressing.

“Implementation has started, and at the EU level, it has started pretty quickly and is going well,” he said.

Speakers and delegates from more than 20 companies are attending the conference, which will also see presentations from Robert Stack, deputy assistant secretary for international tax affairs in the US treasury.

Mr Stack recently accused the European Union of unfairly targeting American companies in its crackdown on fiscal deals that has impacted on firms such as Apple.

Mr Stack said the way tax on multinationals is regarded in the US and Europe was “starkly different.”

“Taxation of multinationals is a man and women in the street issue here and the first thing to appreciate is that is not the case at. home,” he said.

Noting “fundamentally different attitudes” over taxation, Mr Stark said the politics at work that led to the creation of Beps took the multinational community by surprise.

Referring to the “politicisation of tax,” Mr Stack said he had noted a sea-change in the US, which had seen multinationals paying considerably more attention to tax structures than previously.

Also speaking at the conference, Valere Moutarlier, director in charge of direct taxation at the European Commission, congratulated Ireland for being one of the first countries to implement Beps measures. He said the country could be assured that all member states would introduce the same transparency rules.