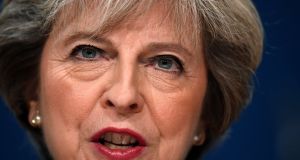 British prime minister Theresa May has told business leaders that she wants to cut corporation tax to the lowest among the world’s 20 largest economies.

Speaking at the CBI, a leading business organisation in Britain, she said her aim was “not solely for the UK to have the lowest corporate tax rate in the G-20 but also a tax system that is profoundly pro-innovation”.

Experts suggest Mrs May could cut corporation tax to lower than the 15 per cent rate in a bid to shield the UK economy from the likely upheaval caused by Brexit.

Cutting UK corporation tax from the 20 per cent headline rate could attract companies away from other parts of the EU to Britain and challenge Ireland’s pre-eminence as Europe’s low tax destination for large international companies.

Mrs May said she understood business concerns that Britain could fall off a “cliff-edge” after formal divorce negotiations with the EU and would address those fears in Brexit talks.

She also said there were a number of ways to improve workers’ representation in companies – a softening of an earlier pledge to make sure they were appointed to boards.

“I am conscious that there will be issues that need to be looked at . . . that people don’t want a cliff-edge; they want to know with some certainty how things are going to go forward. That will be part of the work that we do in terms of the negotiation.”

She faces some of Britain’s toughest negotiations since the second World War to secure an advantageous divorce from the European Union and is keen to persuade business to back her push to create “the conditions where winners can emerge and grow”.

Her speech to the CBI was also aimed at easing concerns among company bosses that Mrs May wants to rein them in by calling for workers on boards and promising to tackle excessive executive pay.

“It is not about propping up failing industries or picking winners, but creating the conditions where winners can emerge and grow.”

“It is about backing those winners all the way, to encourage them to invest in the long-term future of Britain. And about delivering jobs and economic growth to every community and corner of the country.”

Mrs May said her government planned “substantial real terms increases in government investment worth £2 billion per year by 2020” in research and development, including a new industrial strategy challenge fund to back priority technologies such as robotics and biotechnology.

With analysts saying that Britain faces slower growth next year after voting to leave the EU at a referendum in June, Mrs May wants to kickstart an economy to help those who are “just managing” and who largely voted in favour of Brexit.

Finance minister Philip Hammond said on Sunday his first budget plan would not include a big new spending push because of “eye-wateringly” high public debt levels, but would offer some help for the economy and struggling families.

Mrs May, who was appointed prime minister after the Brexit vote, urged companies to run with new technologies and get better at commercialisation to develop new ideas in Britain.

“Government will consult on how the fund can best support emerging fields such as robotics and artificial intelligence, industrial biotechnology and medical technology, satellites, advanced materials manufacturing and other areas where the UK has a proven scientific strength,” Mrs May’s office said. – (Reuters)