Goods exports down 5.8% in first seven months of year 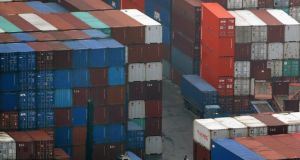 The value of Irish goods exports fell by 3 per cent in July as the decline in the area of medical and pharmaceutical products continued. Photograph: Feng Li/Getty Images.

Irish goods exports amounted to some €51.1 billion in the first seven months of this year, 5.8 per cent less than in the same period in 2012.

Figures released by the Central Statistics Office show the value of Irish goods exports in July was 3 per cent lower year on year, as the decline in the area of medical and pharmaceutical products continued.

Overall, goods exports in July amounted to €7.6 billion, some €209 million less than in the same month last year.

Exports of pharmaceuticals fell some €300 million (13 per cent) lower than in July 2012 as more products came off the patent cliff - a multi-year window when some of the largest selling drugs of a generation come to the end of their period of exclusivity.

Medical and pharmaceutical exports amounted to €13 billion in the first seven months of the year, compared to €14.8 billion in the same time last year.

The CSO said exports of food and live animals were 15 per cent (€101 million) higher than in the same month last year.

European Union member states took about 54 per cent of the value Irish goods exports in July.

The US was Ireland’s single largest trading partner during the month, accounting for some 17 per cent or €1.36 billion of goods shipped.

Merrion stockbrokers economist Alan McQuaid said weak global demand had hit Irish exports in recent times but there were now signs that the world economy is starting to recover. He said this “augurs well for Irish exports in the coming months”.

Mr McQuaid also said there were indications that “we may be over the worst” when it came to the expiry of pharmaceutical patents.

The value of goods imports increased by €105 million (3 per cent) year on year to €3.9 billion as demand for food and live animals increased by 12 per cent (€52 million) and imports of chemicals and related products rose 6 per cent (€50 million).

Some 66 per cent of the good imported into the State in July came from the EU, with 31 per cent of that figure coming from Britain. The US (11 per cent) and China (6 per cent) were the main non-EU sources of imports.

The State’s trade surplus stood at €3.7 billion at the end of July down from €4 billion a year earlier.

On a monthly basis, seasonally adjusted exports rose by 3 per cent in July while imports fell by 2 per cent, while the trade surplus rose by 8 per cent.

Minister for Enterprise Richard Bruton said that after a number of challenging months in export markets, the improved monthly figures were “encouraging”.

1 Nama grants Ronan four-month extension on €160m glass bottle site deal
2 Retailers accused of ‘stealing business’ from rivals by flouting restrictions
3 In praise of Gogglebox Ireland, an essential service in all but name
4 How to avoid a communication breakdown
5 How long can Government afford to keep State pension age at 66?
6 Goldman Sachs in talks to take over Blanchardstown shopping centre
7 Outgoing Irish a sitting duck for Covid
8 ‘French people are pretty relaxed. They don’t pander to scaremongering or hysteria’
9 Klaw restaurant fails to stop landlord taking possession in rent row
10 Guinness brings out a non-alcoholic version of the black stuff
Real news has value SUBSCRIBE