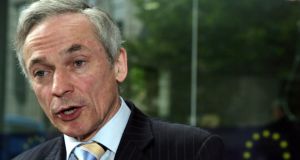 Minister for Jobs, Enterprise and Innovation Richard Bruton: “Tax rates of over 50 per cent on average incomes . . . make too many people question whether they would be better off not working at all.” Photograph : Matt Kavanagh

Commenting on the Forfás Costs of Doing Business in Ireland report, which found Ireland’s marginal rate of income tax, at 52 per cent for employees and 55 per cent for the self-employed, higher than most of the State’s competitor countries, Mr Bruton said the Government must begin reducing the income tax burden “as soon as possible”.

“Tax rates of over 50 per cent on average incomes damage inward investment and entrepreneurship, and make too many people question whether they would be better off not working at all,” he said.

Marginal tax rates (the tax paid on an individual’s last euro of income) are in excess of 50 per cent for single individuals earning €32,800 per annum, according to the report published today.

Mr Bruton said the Government must look carefully at the burden of labour taxation on competitiveness, if it wants to sustain and improve the levels of investment and jobs.

“If we are to sustain and accelerate the transition in our economy and the jobs recovery that has begun, then this Government must continue to keep its promise to avoid any further increases in the burden of taxes on work.”

The report found Ireland’s tax wedge on labour (the gap between what the employer pays and what the employee receives) has widened for all income categories as a result of changes to tax bands and credits and the universal social charge. The wedge is significantly higher for higher income earners – a financial disincentive for skilled internationally mobile workers.


Tax competitiveness
“The tax wedge is important from a competitiveness perspective for a number of reasons – it affects the cost of labour for the employer, it partly determines labour supply, and it can impact on Ireland’s ability to attract high-skilled labour,” the report said.

Forfás said a competitive tax regime was essential for attracting and retaining individuals in Ireland and for encouraging people to remain. It concluded the increases in personal taxation in 2010 and 2011 have eroded cost-competitiveness and the incentive to work.

The report also found the cost of legal services had increased since the boom, despite a significant reduction in other business costs. Solicitor fees are now 11 per cent higher than they were in 2006.

The report said the drop in business costs was driven by dramatic reductions in property-related costs and falling prices across a range services.

The cost of constructing a prime office unit fell by 32 per cent over 2007-2011, while the cost of renting an office unit has fallen by 45 per cent. The price of computer programming and consultancy services, and advertising and media services are almost 5 per cent lower than in 2006.

Notwithstanding the reductions, energy costs remain a cause for concern, according to Forfás, as Ireland is the fourth most-expensive location in the euro area for electricity and diesel.

The price of legal services has proven sticky and not adjusted downwards to the degree expected given economic circumstances, Forfás found. Legal service prices (excluding barrister fees) were 11 per cent higher in 2012 than 2006, despite the recession.


Legal excess
Forfás said there was potential for further legal reforms including the creation of a single-tier counsel system and the opening of conveyancing to suitably qualified professionals other than solicitors. In addition to enacting the Legal Services Bill, it said reform of court procedures would offer significant potential for costs.

While Ireland’s cost competitiveness has improved since 2008, over half of the improvement is accounted for by favourable exchange rate movements (ie a weak euro making Irish exports cheaper in non-euro markets).

Forfás chief executive Martin Shanahan said structural reform is required to ensure that the improvements seen to date in cost and competitiveness performance are embedded in the economy and enable Ireland return to strong economic and job growth.