Ibec boss warns of Irish exit from EU after ‘Brexit’ 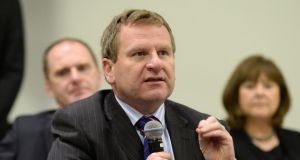 Danny McCoy of Ibec: “If Britain should decide on an exit, there will definitely be a debate in Ireland on whether we should not do the same.”

The boss of Ireland’s largest business lobby group has said an Irish exit from the EU might become “inevitable” if Britain leaves the union.

Danny McCoy, who has led Ibec since 2009, told Germany’s Frankfurter Allgemeine Zeitung in an interview that Ireland’s departure from the EU could not be ruled out in a “Brexit” situation.

After his election victory last week, British prime minister David Cameron promised an in/out referendum on EU membership by the end of 2017.

“If Britain should decide on an exit, there will definitely be a debate in Ireland on whether we should not do the same,” Mr McCoy told the German paper.

“I can imagine circumstances in which that might become inevitable.”

Mr McCoy’s intervention comes amid a deepening Irish debate on the implications of the looming referendum in Britain.

He told The Irish Times today that Ireland would have to assess its own position if the referendum in Britain leads it out of the EU.

“The notion that the calculus for Ireland remains unchanged regardless of the decision Britain makes on ‘Brexit’ is ludicrous,” he said.

“If they go, circumstances have changed as a result of that. Keynes said: ‘When circumstances change, I change my opinion. What do you do sir?’”

In the FAZ, Mr McCoy said Ireland could suffer “potentially enormous” damage if Britain post-exit became a magnet for foreign direct investment on the back of lower business taxes and economic deregulation.

Such moves could lead multinationals based in Ireland to relocate to Britain, calling Ireland’s EU membership into question.

“We would prefer if the British remained in the EU. But after a Brexit, Britain could become a very attractive location for business,” he said.

“We would then be in a totally new situation. I’m not so sure if EU membership would be all that important for Irish multinationals,” he said.

Speaking to The Irish Times, he questioned automatic assumptions that the best option for Britain was to stay in the EU.

“Everybody says Britain will lose out by leaving - all based on the assumption that somehow Britain’s decision to leaves would be very costly for them,” he said.

“There’s only one concrete example of this kind in the past. That was in relation to Britain’s decision to stay out of the euro. Britain was told: ‘If you don’t go into euro, London as a financial capital would be diminished.’

“This never materialised and the City of London financial market had strengthened in the period since the single currency was introduced.

“So why should similar threats in relation to Brexit be as clear?”