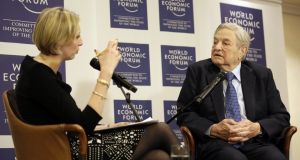 Billionaire investor George Soros said China’s economy is headed for a hard landing, a slump that will worsen global deflationary pressures, drag down stocks and boost US government bonds.

“A hard landing is practically unavoidable,” he said in an interview with Bloomberg Television’s Francine Lacqua from the World Economic Forum in Davos on Thursday. “I’m not expecting it, I’m observing it.”

Mr Soros, who built a $24 billion fortune through savvy wagers on markets, said he’s been betting against the Standard and Poor’s 500 Index, commodity-producing countries and Asian currencies, while buying Treasuries.

China’s economic downturn will have spillover effects on the rest of the world, even though the nation’s policy makers have resources to manage the domestic fallout, he said.

The former hedge fund manager turned philanthropist joined a chorus of top investors - including DoubleLine Capital’s Jeffrey Gundlach and Scott Minerd of Guggenheim Partners - warning of further downside in riskier assets after a selloff that erased $16 trillion from global equities since June and sent commodities to the lowest levels in more than two decades.

Concerns over China have roiled global markets this year amid waning investor confidence in the government’s ability to restructure the economy without a crisis. Past Record Hungarian-born Soros rose to fame as the manager who broke the Bank of England in 1992, netting $1 billion with a bet that the UK would be forced to devalue the pound. He also successfully bet that Germany’s mark would rise after the collapse of the Berlin Wall in 1989 and that Japanese stocks would start to fall in the same year.

Mr Soros, who began his career in New York City in the 1950s, led his hedge fund to average annual gains of about 20 percent from 1969 to 2011, when he returned money back to investors.

More recently, he has repeatedly warned of a 2008-like catastrophe. On a panel in Washington in September 2011, he said the Greece-born European debt crunch was “more serious than the crisis of 2008.”

He reiterated that idea earlier this month, saying that global markets are facing a crisis reminiscent of the one more than seven years ago.

While Mr Soros didn’t elaborate on his definition of a hard landing, he said a more accurate measure of China’s current economic growth is 3.5 percent, versus the latest official figures showing a 6.8 percent expansion in the fourth quarter. He added that the country’s unsustainable debt burden and capital flight are both signals of a hard landing.

China had about $843 billion of capital outflows in the 11 months through November, according to a Bloomberg Intelligence estimate. China’s slowdown is combining with lower oil prices and competitive currency devaluations to increase the risk of deflation around the world, Mr Soros said.

That will make 2016 a “difficult” year for markets because it’s a scenario investors aren’t used to, he said. Consumer prices in the US declined 0.1 per cent in December, while factory-gate prices in China have dropped for a record 46 consecutive months. Soros said he would be surprised if the Federal Reserve raised interest rates again after increasing them in December for the first time in almost a decade, despite the central bank’s projection for further hikes this year. The Fed made a mistake in lifting rates when it did, he said, because deflationary expectations had already set in and consumers were less likely to respond to lower borrowing costs with increased spending.

Not everyone has such a bearish view. Investors are probably overstating the impact of China’s slowdown on the rest of the world and the economy is likely to avoid a hard landing this year, according to Goldman Sachs Private Wealth Management. Heather Arnold, who overseas about $42 billion as a money manager and director of research at Templeton Global Advisors, said in an interview in Tokyo this week that China shouldn’t be a big concern for global investors and she’s been boosting stock holdings. “The depth of pessimism that’s out there seems unwarranted,” Arnold said.