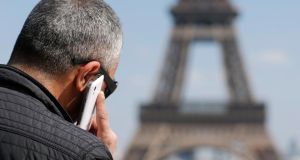 Weak consumer spending and business investment brought the French economy to a standstill in the first quarter of the year. Photograph: Christian Hartmann/Reuters

French business activity unexpectedly shrank in May for the first time in three months and industry morale weakened, surveys and data showed today, underlining the risk of another weak quarter for the euro zone’s second-largest economy.

Data compiler Markit’s preliminary composite purchasing managers’ index for France, covering the manufacturing and services sectors, fell in May to 49.3 from April’s 50.6, sinking below the line dividing contraction in activity from expansion. Both the services and manufacturing sectors contracted for the first time in three months, with the latter shrinking at the fastest rate in four months.

Confirming the survey, morale in the industrial sector unexpectedly weakened in the same month, falling to 99 from 100 April. “With new orders and employment both falling at sharper rates in the latest month, the malaise looks set to persist, dashing hopes of any convincing recovery taking hold,” Markit economist Jack Kennedy said.

Weak consumer spending and business investment brought the French economy to a standstill in the first quarter of the year, with inventory changes and public spending the only factors keeping it from contracting. The PMI for the manufacturing sector missed expectations, falling to 49.3 from 51.2 in April.

Analysts polled by Reuters had forecast a reading of 51.0 on average. The PMI for the services sector fell to 49.2 from 50.4 in April, also below analysts’ consensus forecast of 50.2.

Markit economist Rob Dobson said one of the reasons why France lagged other euro zone countries in the PMI index was weak domestic demand. “Growth should continue around the stagnation mark,” he said.

Outstanding business for French private sector companies fell for the first time in three months, employment fell for the seventh month in a row and input prices jumped to a four-month high while output prices dropped, weighing on business margins. - Detailed PMI data are only available under licence from Markit and customers need to apply to Markit for a licence.