Everybody wants a slice of the Apple pie 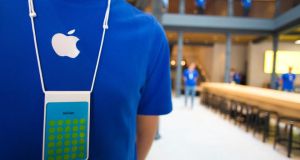 Apple Sales International had income of about $74 billion (€54.2 billion), a portion of which ASI transferred via dividends to its parent, Apple Operations Europe.

Apple Sales International has filed a notice to the Companies Registration Office that it is providing financial assistance for the purchase of its own shares, most likely as part of a response to the controversy over Ireland’s relationship with the massive Cork-based subsidiary.

Ireland Inc, led by the Department of Finance, has apparently lined up a “high-powered” (ie expensive) legal time to fight the good fight following the European Commission’s decision to open a formal inquiry into the corporate tax affairs of Apple here.

The Irish position is that the company, despite what might or might not have been said to a senate committee in Washington DC, did not receive any special deal from the Irish authorities, as Ireland just doesn’t do special deals with particular companies.

The commission’s inquiry will focus on tax rulings given to two of Apple’s Irish subsidiaries: Apple Sales International and Apple Operations Europe. The senate committee in Washington heard that over a four-year period, 2009 to 2012, Apple Sales International had income of about $74 billion (€54.2 billion), a portion of which ASI transferred via dividends to its parent, Apple Operations Europe.

ASI claimed to have no tax residence anywhere and had paid little or no taxes to any national government on the $74 billion.

Ireland has already announced that it is changing its rules so that no Irish-incorporated companies can claim statelessness for tax reasons. It has further announced a consultatation process with business and other interested parties, as it prepares to tweak its tax regime for a post-global-reform corporation tax world.

Apple, no doubt, is among a wide number of multinationals with operations here that are also considering their options for the most likely post-reform, and post-inquiry, scenarios.