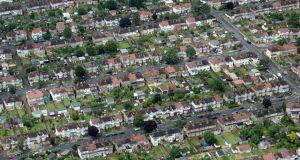 Suburban housing and streets are seen from the air. Photograph: Matt Cardy/Getty Images)

The Bank of England is most likely to try and cool Britain’s booming housing market by using one of the more radical options in its toolbox, a cap on how large mortgages can be compared to a borrower’s income, a reuters poll has found.

House prices have surged 11 per cent over the past year, raising concerns among policymakers that it could be overheating.

This prompted British finance minister George Osborne last week to give the BoE’s financial policy committee stronger powers to curb mortgage lending, enabling it to compel lenders to act rather than to just make recommendations to the sector.

While economists polled in the past week were united in saying the FPC would act to reduce the risks that the housing market poses to financial stability when it meets today, they were less sure about what moves it would make. The moves will be announced on June 26th alongside the FPC’s half-yearly financial stability report.

The likeliest option among economists polled by Reuters was for the BoE to recommend that lenders limit how much they lend as a ratio of a borrower’s income.

This could be politically sensitive in the run-up to a national election in May 2015 because it may make it harder for first time-buyers to get on the property ladder. Until recently, the FPC had been expected to take measures which affect home-buyers less directly, for example, by requiring banks to hold more capital against home loans.

“They could look at loan-to-income ratios and either ask banks to increase the capital that they hold against new lending which is at a high loan-to-income ratio or put forward a recommendation that banks restrict the lending they do,” Allan Monks, JP Morgan’s UK economist.

A loan-to-income cap was seen by 14 of the 29 economists polled. Smaller numbers said the BoE would make lenders hold more capital against certain types of mortgages, limit how many higher risk loans a bank could issue, or ask the government to cut the £600,000 ceiling on its Help to Buy scheme which aids buyers unable to pay large deposits. Since April, mortgage lenders have been required to make stricter checks on a borrower’s ability to repay, which has slowed the process of giving loans and which lenders prefer to relatively crude loan-to-income caps.

A further option for the FPC would be to make those checks tougher. With predicted gains of 8 per cent this year and a still robust 5 per cent in 2015, all of the economists in the poll who answered an extra question said the Bank would act.

Governor Mark Carney cautioned last week that average household debt was 140 percent of disposable income - higher than in most other countries. With the average asking price for a home at 272,275 pounds in June according to property website Rightmove - around 10 times the typical British salary - that ratio is unlikely to come down anytime soon.

Data from the Office for National Statistics today showed that UK house prices rose 9.9 per cent year on year in April, marking the biggest rise since June 2010.