Nama seeking to enforce guarantees for €46m lent to developer 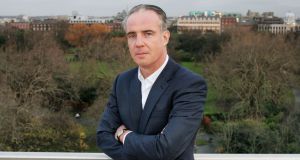 Property developer Garrett Kelleher has been refused an order for disclosure of certain documents for his defence of Nama’s High Court case seeking to enforce guarantees he gave for some for €46 million on loans.

Nama company, National Asset Loan Management (NALM) is seeking judgment against Mr Kelleher relating to guarantees on some €350 million in loans provided by the collapsed Anglo Irish Bank for developments in Ireland, the US and Belgium.

Last week, US lawyers representing him filed a lawsuit in Illinois seeking damages of $1.2 billion (€975 million) against Nama, alleging that the agency destroyed his chances of building the Spire.

In his defence of the 46 million judgment case here, Mr Kelleher says he was assured he would not be pursued under his guarantee, given his “extensive co-operation” with Nama.

As part of that defence he sought and obtained a High Court order in October 2016 requiring Nama to make discovery of certain documents. That decision was later affirmed by the Court of Appeal.

Nama provided affidavits of discovery in December 2017 but Mr Kelleher then brought a new application to the High Court seeking that the agency make discovery in accordance with the previous High Court and Court of Appeal orders.

The judge, who also described Mr Kelleher’s application as “curious”, said in essence the developer did not believe Nama had complied with its discovery obligations in relation to those matters.

He is not alone among litigants in believing the other side is not being completely open and frank, the judge said.

While he might ultimately be proved “correct in his scepticism”, there was not an easy answer to his concerns when there are sworn averments (from Nama) to the effect that full discovery has been provided, he said.

However, he is not without recourse because, if it turns out those averments are incorrect, there are significant implications for Nama and those swearing the affidavits.

In this case, the court was not provided with any documents Mr Kelleher can show were not discovered. For the court to take the “very significant step” of concluding a party had given false sworn evidence, it (court) would need more compelling evidence than he had provided.

Mr Kelleher essentially believes Nama had misunderstood the issues in the action and the agency may not have used the correct search terms for their electronic discovery, the judge said.

In the circumstances, the court cannot see how it can “simply disbelieve the sworn averments of two employees of Nama that they had provided all relevant documents to Mr Kelleher,” he said.