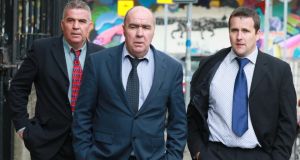 L-R: Martin and Pat O’Donnell with Patrick Coyle outside the Four Courts during the opening day of their High Court action for damages. Photograph: Courts Collins

A garda, described as an “accomplished boxer”, punched a man in the face during a protest over the Shell Corrib gas field in Co Mayo, a High Court jury has been told.

The garda’s father, also garda and a boxer, then punched him in the head, the jury heard.

There was Garda “indiscipline, brutality and excessive force” during the protest and unprovoked assaults were perpetrated on three local men by gardaí, counsel for the three said.

There was an “unexplained” and “mysterious” gap in a Garda video recording of the protest, Micheál P O’Higgins SC added.

He was opening separate civil actions by Patrick Coyle, a farmer, Barnatra, Ballina, and brothers Patrick O’Donnell and Martin O’Donnell,Shore, Porturlin, Ballina, both fishermen, over the alleged assaults.

The three cases are being heard together before Mr Justice Paul McDermott and a jury and are listed for five days.

The men have sued the Garda Commissioner and the State for damages arising from alleged assaults on them during a protest near the Shell refinery on January 19th 2007.

Outlining the case, Mr O’Higgins said the assaults occurred when a “large number” of gardaí were dealing with a protest involving about 80 people near Bellanaboy bridge as a convoy of workers and others approached the Shell refinery sometime after 7.30am on January 19th, 2007.

Patrick Coyle was punched in the face by a Garda as Mr Coyle was holding on to another protester whom a sergeant had directed should be removed from the protest, counsel said. The jury would be satisfied the garda who punched Mr Coyle was Garda Marvin Lee, an “accomplished boxer”.

As Mr Coyle was turning away from the gardaí and into the crowd, Garda Patrick Lee, also an accomplished boxer and father of Marvin Lee, struck Mr Coyle a blow to the head, counsel said. That was a “forceful strike” and Mr Coyle fell to the ground.

Counsel said the gardaí denied the claims and it would be for the jury to decide whether they believed his clients’ accounts of what happened or preferred those of the gardaí.

Among factors to be taken into account was that none of the gardaí allegedly involved experienced injuries while his clients had clear injuries, particularly facial injuries, counsel said.

A Garda video recording of the protest also appeared to have stopped for some seven minutes at the very time it was alleged the assaults had occurred, counsel added.

After the assault, Mr Coyle’s forehead, nose and lip were bleeding, his front tooth was loosened and he was treated at Mayo General Hospital, counsel outlined.

Martin O’Donnell needed suturing of his right eye for a laceration and also suffered an injury to his cheek, neck pain and discomfort, distress and upset, counsel said. His brother Patrick suffered injuries to his nose, headaches, signs of soft tissue bruising, pain and discomfort in his lower back and his dental bridge was also broken, counsel added.

While none of the three alleged they suffered life-threatening injuries, they were contending what happened to them was wrong, unlawful and should not have occurred, he said.

They were seeking compensation and to have the injustice of what happened to them “marked”. Further injustice was inflicted on his clients because of “tactics” employed by gardaí after their solicitor complained about the incident to the authorities, he said.

In evidence, Patrick Coyle said he was hit by a garda whose number he had immediately said out loud and whom he now knew to be Garda Marvin Lee. He believed he was later hit by Garda Patrick Lee because of having said the number out loud.

Mr Coyle said he made a complaint at Belmullet Garda station that day. He later decided to pursue civil action rather than the complaint because he did not believe “guards investigating guards is going to do anything”.

He was later prosecuted for assault arising out of the incident and cleared of all charges.

Under cross-examination, he denied a suggestion Garda Marvin Lee was dragged through the protest and that he, Mr Coyle, engaged with others in assaulting him.