Minister for Social Protection comes in fifth in three-seater 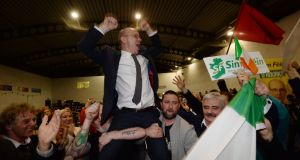 They were both elected on the seventh count, with Byrne being elected without meeting the quota.

O’Rourke, who secured 24 per cent of the vote, was elected on the second count. As popularity for Sinn Féin surged over the course of the election campaign, there were fears for Doherty, who was only just ahead of O’Rourke when she claimed the last seat in the 2016 election.

However, it was unexpected that first time Green Party candidate Seán McCabe would also poll higher than the outgoing Fine Gael TD and knock her back to fifth place.

The results will leave Fine GAel disappointed as they now hold only one seat in Meath East.

O’Rourke, who has represented the Ashbourne area in Meath County Council since 2014, said his party was “quietly confident” in the lead up to the election that Sinn Féin would get a seat in this constituency.

“That, in and of itself is an achievement because we have never done that before. It’s the first time there has ever been a Sinn Féin TD in Meath-East and it’s going to be the same in a lot of places,” O’Rourke said.

“Given the stature of the three sitting TDs, it was a competitive constituency but the extent of the move towards Sinn Féin has really been extraordinary.”

1 Could Ireland put towns under lockdown if coronavirus arrived?
2 IRFU seek meeting over call to postpone Ireland-Italy match
3 Dublin man may have been stabbed to death by woman in parking space row
4 Father-of-three found guilty of murdering Patricia O’Connor
5 Why Sinn Féin will not call the State by its name
Real news has value SUBSCRIBE