Train to Busan 2: Peninsula – A true horror of a movie 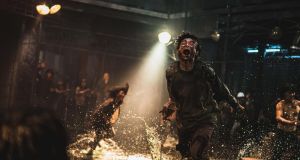 For anyone who hasn’t tired of zombie movies, this pounds along as a glossy spectacle if nothing else. 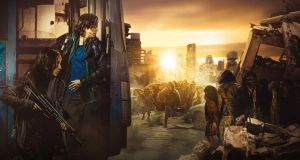 Characters behave in consistently foolish ways throughout this action movie.

There are moments when, with all the best will in the world, the horror genre tests patience. Add together all of the incredulousness generated by every scream queen who went creeping into a darkened basement and you’ll be close to the jaw-droppingly foolish conceit at the heart of this not-quite-sequel to the hit 2016 film.

Five years after the events of Train to Busan – in which zombies rampaged an intercity rail journey, carriage by carriage – Chinese mobsters hire a crack team of Koreans to return to their apocalyptic, zombie-infested home peninsula and retrieve a truck that may contain millions of dollars. It’s a terrible, terrible idea made worse by survivors who leave the viewer yearning for the comparative polite society of Mad Max. Hello underground fight club in which humans are thrown to the undead.

Save for a damaged soldier hero, a resourceful single mother and her plucky kids, characters behave in consistently foolish ways throughout this actioner. Who knew that hovering over the motionless body of a zombie might prove to be fatal?

Sang-ho Yeon, the gifted filmmaker behind The King of Pigs and Train to Busan, brings plenty of panache to various tight spots and set-pieces, but Train to Busan 2 lacks the discipline and emotional weight of its predecessor. It chases Big Moments relentlessly, and to no avail, with various PTSD flashbacks and cheesy slow-motion acts of sacrifice.

Save for the returning filmmaker, this is a sequel in the way that Grease 2 or American Psycho 2 is. (Speed 2 managed to have more in common with its predecessor.) The film was cheekily released in the US as Train to Busan Presents Peninsula. It’s “in the same universe”, we’re told. Is it really? I don’t recall all this maximalist CGI.

Still, for anyone who hasn’t tired of zombie movies, this pounds along as a glossy spectacle if nothing else. Expect zombies with pace not social commentary.