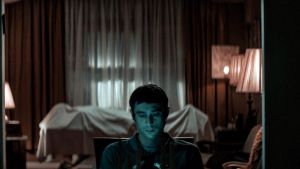 Few, if any, of the ecstatic reviews for Blumhouse’s The Vigil have failed to reach for such handy labels as “The Jewish Exorcist” or “The Hasidic Babadook” or “The Yiddish Conjuring”. Those comparisons are fair enough in the circumstances. This excellent first feature from novelist turned writer-director Keith Thomas is a nifty, textured horror (mostly), thriftily set in one creepy house.

As with all good horror heroes, Yakov (Dave Davis) is a young man with a traumatic past. We first encounter the young Orthodox Jew at a support group for those who have recently left the Hasidic community.

The Hasidic community, however, has not left Yakov. Outside the meeting, Reb Shulem (Menashe Lustig), an old friend, is waiting, hoping to bring Yakov back to the fold. He has an offer of some paid work as a “shomer”, to keep vigil over the recently deceased Mr Litvak (Ronald Cohen), in order to ward away any evil spirits. Yakov, who we know is having to choose between food and medication, is in no position to refuse.

Entering the Litvak home, a corpse awaits under a sheet in the living room, and Mrs Litvak (Lynn Cohen), who Reb says has Alzheimer’s, immediately warns Yakov to leave the premises. He doesn’t. And thus begins a long, creepy night of flickering lights, weird noises upstairs, fractured dreams, hallucinations, and – just to seal the deal – a video playing in the basement in which the late Mr Litvak describes the ancient demon that attached itself to him at Buchenwald.

A work of impeccable genre timing, from the careful use of flashbacks to Michael Yezerski’s unsettling score, The Vigil makes equally canny use of its Hasidic environment and – move over, crucifix – tefillin. Cinematographer Zach Kuperstein, whose indelible monochrome powered along The Eyes of My Mother, finds interesting things to do with chintz and shadow.

The supporting cast, including A Serious Man’s Fred Melamed, who voices Yakov’s psychiatrist on the phone, is great, but Dave Davis’s petrified protagonist is nothing short of star-making. The final, ambiguous shot has franchise potential. Yes, please.

In cinemas from July 17th