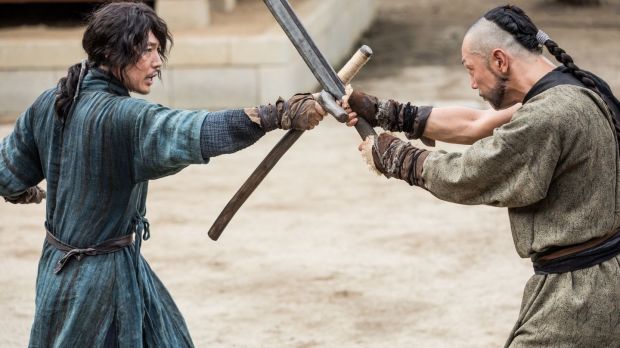 The Swordsman features Jang Hyuk and is directed by Choi Jae-Hoon.

Between 1962 and 1979, Japanese actor Shintaro Katsu played Zatoichi, a wandering blind samurai, across some 25 movies and 100 television episodes. The character has subsequently been feminised into Ichi by the Shaw Brothers, Americanised by Rutger Hauer in Blind Fury, and rebooted into a Silver Lion winner at Venice by Takeshi Kitano.

It’s impossible not to think of this famous unsighted hero while watching this elegant feature debut from South Korean director Choi Jae-Hoon. The Swordsman is not, however, a homage to its Japanese predecessor. For much of the opening hour, the film grapples with the political intricacies of the historical transition between the Ming and Qing dynasties of China, a conflict that killed some 25 million people between 1613 and 1683.

It’s a murky international situation, one that stretches to what is now Korea, thereby allowing for a welcome turn from The Raid’s Joe Taslim as a merciless slave trader.

Stripped of context, the movie is Taken with graceful metal-clanging. Tae-yul (Jang Hyuk), the fighter of the title, has, as the film opens, retreated to a rural hilltop to raise his teenage daughter Tae-ok (Kim Hyun-soo). The girl hopes to find a cure for her father’s deteriorating sight and a life beyond their rural retreat. In this spirit, she becomes the ward of a wealthy family in exchange for working as a companion, a position that puts her in great jeopardy.

The damsel-in-distress narrative is disappointing and the plot – for all its context – goes nowhere special, but the costumes and sets nod ambitiously toward Akira Kurosawa’s Ran. The choreography is equally impressive. In common with much of the wuxia fare that makes its way to this part of the world, the aesthetic owes a debt to Crouching Tiger, Hidden Dragon and the films of King Hu. One superb sequence, in which the hero dismantles an entire battalion of soldiers in one long take, is Old Boy: The Ballet.

'A sense of urgency sustained me during those first weeks'