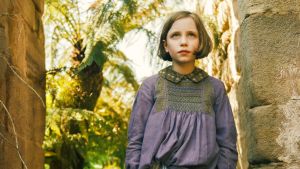 Dixie Egerickx in the Secret Garden

The very best thing about Frances Hodgson Burnett’s 1911 novel The Secret Garden is the ugly, ill-tempered heroine, Mary Lennox: “as tyrannical and selfish a little pig as ever lived.”

Disappointed by her daughter’s unattractiveness, her British mother leaves Mary to an ayah – or caretaker – and the Indian staff. The little girl’s every whim is seen to. She is not sorry when her ayah dies, nor when she loses her parents to cholera. Her transformation into a decent human being is bound up with the restorative powers of the secret garden of the title and is as gradual as it is astonishing.

Harry Potter and the Cursed Child writer Jack Thorne (Enola Holmes, Radioactive) has made several significant detours from Burnett’s source material for this fourth major film adaptation (excluding a dozen or so anime and TV versions).

The action has moved from the turn-of-the-century to 1947 and the British partition of India and Pakistan. The family history is revised. One major character disappears altogether. But most significantly – and disappointingly – save for some unkind remarks about stodgy-looking porridge, Mary (essayed by Dixie Egerickx) is as pleasant as she is pretty.

For all these tweaks and revisions, Marc Munden’s film brings nothing particularly new to the party, save for a tangle of CG plants and some welcome colourblind casting. Following an eventful politicised overture, the preteen Mary is transported to England to live with her grief-stricken uncle (Colin Firth), sour sickly cousin Colin (Edan Hayhurst), and a staff headed by a tutting Julie Walters.

Mary befriends a stray dog (another odd deviation from the book), a robin, and Dickon (Amir Wilson), a boy from – dun dun dun – the lower orders. Dickon, remarkably, never reaches for a guillotine, even when Colin is at his most sour and entitled.

Any version of The Secret Garden is better than none and while this latest iteration is lacking in grief and gothic, it’s a pleasing old-fashioned family film bolstered by lovely performances. Dixie Egerickx, the young star of The Little Stranger and Patrick Melrose, once again proves that she’s a force to be reckoned with. Even if her character has lost the wonderful porcine obnoxiousness of Burnett’s creation.