Review: A likeable salute to a Magic Ireland we don’t see much anymore 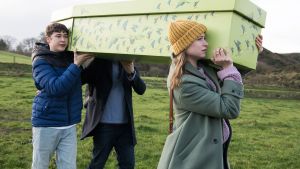 Samuel Bottomley and Niamh Algar in The Last Right

You’ve got to admire their chutzpah. Some way into this very Irish “Irish film” one character remarks that Rain Man was only marginally accurate about autism. “All autistic people are different,” we are (quite correctly) told.

Hang on a moment. This is a film about a heel who gains wisdom after driving about the country with the autistic brother he has hitherto ignored. Along the way, the latter character – whose catchphrase is “That’s not a fact!” – chucks out information on every phenomenon encountered. You can’t escape accusations of aping Rain Man simply by dissing Rain Man. That’s not how this works.

No matter. That uncomfortable finesse noted, Aoife Crehan’s film remains a reasonably likeable salute to a Magic Ireland we don’t see much anymore. You remember? Country people speak wisdom. The guards are awful eejits. An aerial shot of damp cliffs sooths all ills and punctuates all crises.

Most of the first 30 minutes is devoted to setting up that road trip, but, truth to tell, some questions do remain. Michiel Huisman out of Game of Thrones plays Daniel, an Irish-American who, when travelling home for his mum’s funeral, ends up sitting next to an imminently dead Jim Norton.

Some preposterous business involving Jim’s passport – Aer Lingus staff will not enjoy their depiction – leads to Daniel being mistaken for the dead man’s next of kin. Further confusions compel him to drive the body to Antrim with his brother Louis (Samuel Bottomley) in the back seat and imminent love interest Mary (Niamh Algar) in the front.

We know where we’re going and it’s not just Rathlin Island. Daniel wants to drag Louis back to New York and install him in the sort of posh school where (unless I’m mistaken) only Robin Williams can save the students from crusty indoctrination. Can the wind, the waves, the eejit guards and the tinkly accents change his mind? “Rain Man” Babbit says there’s a 97.6 per cent chance that is so.

All this might be unbearable were it not for some lovely performances and, despite the familiar tropes, a commitment to treat Louis and his condition with respect. Bottomley steals each of his scenes, Colm Meaney is reliable as the least eejit-like of the guards, and Brian Cox makes the most of his clerical cameo. In sort, it’s the second-best Irish film of 1997. Again.