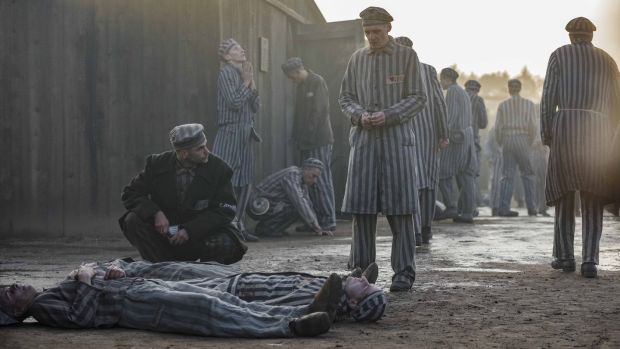 There is no right way to treat Auschwitz in a dramatic feature (some would still argue nobody should try). It would be foolish – and offensive – to pretend that any film could accurately represent the conditions in that place. Yet no sane film-maker would wish to give his viewers too comfortable a ride. The truth should poke its wretched elbows through the cinematic artifice.

The Slovakian entry for international feature at this year’s Oscars is a model of balance and responsibility throughout. No efforts are made to starve the actors into futile travesties of the largely doomed captives. But Peter Bebjak’s disciplined film is forever reminding us of arbitrary cruelties and absurd outrages. At a moment of great tension, the Nazis, seeking to press home their ruthlessness to a troublesome inmate, publicly murder a female prisoner, allegedly the unfortunate man’s sister, in the neighbouring camp. He takes comfort from the fact that he heard the unseen woman speak Polish rather than Slovak. Maybe it wasn’t her. One of his comrades grimly observes that this most likely means the sister was already dead.

The Auschwitz Escape (an even worse title than The Auschwitz Report, as it was elsewhere marketed) also has useful information for those of us who don’t know as much as we should about the paltry distribution of information about the genocide to Allied intelligence. The film, which is economically scripted by Jozef Pasteka, Tomas Bombik and the director – the temptation to go way past the 93 minutes here must have been hard to resist – tells the story of a genuine escape by Alfred Wetzler and Rudolf Vrba in 1944. They ultimately made their way to the Red Cross and helped compose a document known as the Vrba-Wetzler Report. The information therein was too horrific for many to believe and, despite the men’s urging, no raids were launched on the camps, but their stories may have halted the transportation of 100,000 Hungarian Jews to Auschwitz.

The film does loosely fit into the genre of wartime escape drama, but nobody is likely to confuse it with The Colditz Story. Early on, Wetzler and Vrba, Slovakian Jews, slip themselves into wooden crates and await the right moment to flee. Most of the action in the first half is taken up with brutal, tense interactions between the remaining prisoners and the frustrated Nazi authorities. The SS have free rein to beat and murder as they please. Terrible sacrifices are made. The dynamics of terror are teased out. We get some sense of the horrors the Germans have seen – and perpetrated – on the eastern front before their posting to southern Poland. One officer taunts his charges with ambitions to write his memoirs when retired by the Black Sea.

Bebjak wisely resists hard naturalism for a theatrical boldness in this long opening act. An ochre filter heightens the sense of menace in one night-time exterior. Elsewhere, the washed-out colours tend to blend night into day. There is a sense of a past being assembled from memories too awful to properly examine.

Inevitably the drama loosens up and allows in forgivable excitement when the two men break out and make their way towards the nearest frontier. We’ve read the title. So we know they’re probably going to make it. But there is enough incident to keep us on edge. Noel Czuczor and Peter Ondrejicka are models of restraint in the lead roles.

Escape from Auschwitz inevitably loses a little energy when, in the closing sections, the two men appear before a Red Cross official played by the unexpected (but always welcome) John Hannah. But those sections are, in their way, as startling as anything that has gone before. The pivotal story of 20th-century European history is being told for the first time outside the camps. It remains hard to process 80 years later.

Video on demand from May 14th