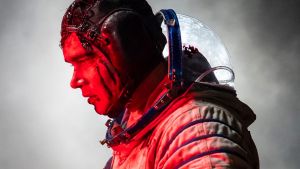 It’s 1983 and cosmonaut Konstantin Veshnyakov (Pyotr Fyodorov) returns from a space mission with an injured fellow cosmonaut, an unexpected passenger, and amnesia. Konstantin, who has likely killed his colleague, is being held in a military facility run by Semiradov (Fedor Bondarchuk). Unorthodox doctor Tatyana Klimova (Lilya 4-ever’s Oksana Akinshina) is drafted in to find out what just happened in space. As the nifty tagline - ‘Man has A New Inhabitant’ -  suggests, Konstantin is playing host to an alien lifeform that lives inside his body, but slithers out through his mouth at night.

There is, remarkably, an even nastier detail for the doctor to uncover.

Egor Abramenko’s debut feature adds interesting textures to this familiar formula with its Soviet Union setting and a creature that is a symbiote rather than a parasite proper.

Sadly, the narrative possibilities for that central organic partnership – an arrangement that gifted several series of material to Star Trek: Deep Space 9 – are squandered on a sentimental tale of fatherly dereliction and a second act that goes nowhere fast.

Strangely melodramatic developments and hints of a quasi-romance between doctor and patient make for a muddle of diversions.

Against that, the strangely Gremlin-like monster is a clever ruse, suggesting a mischievousness that never comes. Watching the creature exit the host body makes for a genuinely unnerving sight.

Practical steps graduates can take to help secure that job