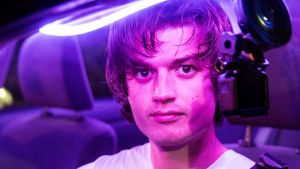 Kurt Kunkle (Stranger Things’ Joe Keery), the sadsack hero of Eugene Kotlyarenko’s inventive thriller, is a driver for the titular rideshare company, a budding musician, a zoomer, and a wannabe social influencer @KurtsWorld96. If only somebody would pay attention.

In common with the desperate protagonist of Ingrid Goes West, Kurt is fixated on more successful digital platform stars, including the swag-laden @bobbybasecamp, a kid who Kurt used to babysit for.

Kurt hatches a grand plan – hashtag “The Lesson” – to grow his influence. He carefully pinholes some poison into water bottles for Spree users and decks his car out with cameras and lights. Dashcam and smartphones feed into the multiple screens and scrolling text that gives the film the ADD jumpiness of a TikTok video.

The screenplay, co-written by the director and Gene McHugh, carefully lines up an initial run of unsympathetic victims. First in the car is a white supremacist; victim number two is swiftly dispatched; victim three is an appalling sleazebag named Mario (John DeLuca).

With three murders under his belt, Kurt is dismayed to find that his numbers have stalled in double digits. “Add some WTF or GTFO,” advises @bobbybasecamp.

Low viewing figures and an encounter with online celebrity Jessie Adams (Saturday Night Live’s Sasheer Zamata) inspires Kurt to commit splashier, splattering kills, as he becomes more and more like an incel Patrick Bateman. “If I can’t have it, why can she have it?” he rages.

There’s a cultish feel about the cast and crew. Spree was executive-produced by both Drake and Future the Prince. Mischa Barton, Frankie Grande (Ariana’s brother) and various Real Life Social Influencers pop up. David Arquette adds tragicomedy as Kurt’s deadbeat DJ dad (“I’m getting a lot of anti-plastic activism on my networks”, he advises).

The brash, larky satire is as broad as its targets. (Kotlyarenko’s debut feature, Wobble Palace, had more nuanced and original notes on social media and interpersonal relationships.) But Spree’s thin black joke is counterpointed by Keery’s central turn. His Kurt remains a pitiable, eager-to-please goofball, even as the bodies pile up.