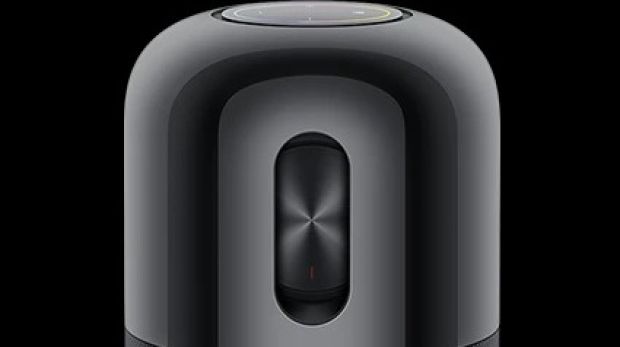 Huawei is still here. The company may have hit a roadblock with the US and its use of Google’s software in its smartphones, but it is not only still making smartphones with its own Huawei Mobile Services in place of Google, but it has also continued to expand its line of fitness and audio products.

The latest addition, the Sound, expands the latter, adding a new high-res audio enabled speaker to the line up.

And in true Huawei style – the company is no stranger to partnerships – the Chinese company has brought in Devialet to lend its expertise. If you aren’t familiar with the company, Devialet is a high-end French audio company that usually charges a hefty price tag for its products. There is a pre-existing relationship here; in 2019, the two collaborated on Huawei’s Sound X.

The speaker is an all-black affair, with a fabric covered speaker section on the bottom third and a glossy black finish on the remainder of the case.

On top, there’s a touch-enabled panel that controls volume, mutes or pauses the audio and has a multi-function button that doesn’t seem to have very many functions. Around the edge of the panel is a multi-coloured ring that lights up to indicate volume, or pulses orange when you are pairing the speaker with your phone.

It’s a nice effect, although there are some issues. That glossy finish is a fingerprint magnet and can go from sleek to smudged if you so much as brush off it. It also shows up the dust quite nicely too.

It’s not the kind of speaker you’ll be carrying around with you though, as although it’s reasonably compact, it’s still quite heavy. Put it on a sturdy shelf, or position it on your desk and leave it alone.

Audio-wise, there is a 4-inch woofer and three full-range 5W loudspeakers, and two symmetric passive radiators in Devialet’s Push-Push configuration. If I’m losing you here, let’s just sum it up by saying that the Sound delivers on audio. You get some serious volume from it, without the distortion you would expect at higher volumes. According to Huawei it goes up to 90dB; while not having the equipment to accurately measure that, I can assure you (as I’m sure the neighbours could) that this thing is loud.

It’s got 360 degree audio too, so you can put it almost anywhere and it sounds good. As far as speakers go, this is a good option.

If you have a device that supports high-res audio, all the better – the Sound supports the standard, so you will get the full lossless audio experience.

Setting it up was relatively simple on Android, with NFC playing a big part. On an iPhone, my options were limited. The NFC one-tap connection didn’t work, and any extras you can set up in the accompanying Huawei AI Life app aren’t open to iOS users either. It’s a simple bluetooth speaker; connect it in the Bluetooth settings and that’s it.

Move to Android and you get more options, although not the full range. You can tweak the sound, adjust the bass and choose from some of the presets for voice or hifi, or go for Devialet’s SoundStage option.

If you are an Android user looking for something resembling a HomePod, the Huawei Sound may be what you need. But although the Sound may look a lot like Apple’s speaker, there are some important differences. For example, it doesn’t have the smart assistant capabilities of the HomePod. That seems strange, given Huawei’s heritage. But apparently, the real power of this speaker is reserved for users in China though, where the AI Life’s functions are much wider.

Great sound, looks good, and is a decent multi-tasker. The inclusion of high-res audio is great, as long as you have devices that can support the standard. You can also hook up non-wireless enabled devices by using the Aux connection tucked away near the bass.

The multi-function button is a mystery, and iPhone users may struggle to justify buying this speaker unless they are true Devialet fans on the hunt for a bargain. The power supply is also a lot bigger than I expected.

To paraphrase Henry Ford, you can have any colour you want as long as it’s black. There are no colour options for the Sound, and although some semblance of choice would be nice, it’s not a dealbreaker.

'A sense of urgency sustained me during those first weeks'