College View: DCU’s Sinn Féin youth does not have the same stance on abortion as Sinn Féin, according to the society’s chairperson. Shauna Bowers reports. 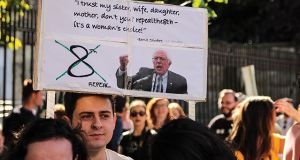 The youth believe that abortion should be made free, safe and legal to all, whereas Sinn Féin believes it should be made available under certain stipulations. Photograph: Mark Carroll

The youth believe that abortion should be made free, safe and legal to all, whereas Sinn Féin believes it should be made available under certain stipulations.

“The youth and Sinn Féin don’t share the same opinion on the matter.”

“Basically we believe that it’s important that abortions are free, safe, legal and we want to rally, young members especially, back into their local cumann and really kind of promote abortions that are free, safe and legal for all women,” said Aaron Ó Ruairc, chairperson of Sinn Féin youth in DCU.

Sinn Féin youth invited members of the Abortion Rights Campaign (ARC), the organisers of the March for Choice in September, to talk about abortion law in Ireland to the society members last Thursday.

“We need to practice having conversations about repeal. Trying to move your own party forward is very commendable,” said a representative from ARC.

O’Rourke invited ARC to prepare the delegates for the Sinn Féin Ard Fheis in November so that they can argue their beliefs to the party in the hope of changing the policy on the Eighth Amendment.

Sinn Fein did not take part in the recent March for Choice because they said ‘it goes beyond party’s position’.