If you enjoy never-ending references to intimate bodily functions, you’ll love this. If not... 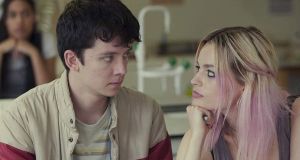 Every generation gets the high school sex farce it deserves. Such was the lesson delivered in season one of Netflix’s Sex Education. What a strange liaison it was. There was that bizarro setting of a hybrid between All-American high school and grim British comprehensive. The sex scenes were antiseptic and squelchy, and certainly not titillating. Gillian Anderson was doing that weird RP accent she uncorks whenever she wants to remind you she wasn’t just in the X-Files.

Still, it was hugely loved and became one of Netflix’s most watched dramas among subscribers in Ireland and the UK. That blockbuster run looks set to continue with season two, which brings us the further adventures of teenage sex counsellor Otis (Asa Butterfield) and his icewater-for-blood therapist mother (Anderson).

Alas, anyone who found the first series impossible to warm to (that’s me sticking a paw in the air) will find season two just as off-putting. The deal breaker for agnostics may once again be the desultory world building. Sex Education asks us to believe in teenagers who speak frankly about sex and frankly speak about nothing else.

What they don’t appear very interested in is study, alcohol, drugs, loud music, social media, comic books, petty vandalism, annoying their parents, Nandos - all of the things that, along with the hormonal stuff, are woven into the tapestry of adolescence.

As Otis Butterfield once again walks that line between guileless and a bit smarmy (is it wrong that I wanted to throw things at him as I watched?). Ncuti Gatwa by contrast brims with charm as his gay best friend Eric, while Emma Mackey is impressively deadpan – and conjures unashamedly with the wildfire 1980s spirit of Molly Ringwald – as Otto’s estranged quasi-romantic interest, Maeve. Her pink hair remains the best reason for sitting though Sex Education.

There are references to The Breakfast Club as the drama heads towards its denouement, though the story opens – oh hilarious – with an outbreak of chlamydia at Mooredale Secondary School. With students’ sexual hygiene clearly lacking, Dr Jean (Anderson) parachutes in to offer her advice.

Cue squirming from Otis, his embarrassment compounded when his mother is revealed to have embarked on a relationship with the father of his new girlfriend.

The humour is big-hearted and whimsical, the references to intimate bodily functions never-ending. If it’s a mix you enjoy, you’ll love it. If not, there is a decent chance you’ll find Sex Education a crash course in torture telly.