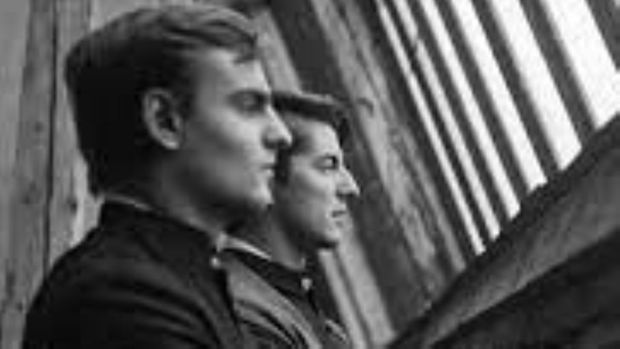 A car stops on a lonely road where a body is removed from the boot. Muck and possibly blood is scrubbed from shoes.

The opening scene of Servants is a misdirection: this is no murder mystery. In Juraj Chlpík’s crystalline monochrome cinematography are echoes of Pawel Pawlikowski’s Ida and Cold War. But, despite sharing screenwriter Rebecca Lenkiewicz with those films, Slovakian director Ivan Ostrochovský’s second feature is a far more elliptical, chilly, sometimes muddled affair than either of the Polish director’s passion plays.

Servants concerns two young men, Juraj (Samuel Skyva) and Michal (Samuel Polakovic), chums who, in 1980, enrol in a seminary where they are carefully monitored by their tutors and the head of the institute (Vladimír Strnisko). The film sets up a series of oppositions, pitching the church against state, to the strains of the US-funded Radio Free Europe.

Much of the action and conflict concerns Pacem in Terris, a Catholic association named after Pope John XXIII’s final missive, an organisation that isn’t explained particularly well. It does, however, allow for a degree of intrigue, clandestine meetings and some incredible compositions in Academy ratio.

Taking a leaf from the Overlook Hotel’s maze, the characters are repeatedly dwarfed by institutions. The film jostles its competing apparatuses of Catholic church and communist state. There is a sly irony in watching young seminarians go on hunger strike to defend the right to live in a manner characterised by one spiritual adviser in the phrase, “You have to understand, we’re not here to be happy”.

Following on from Goat, Ostrochovský’s austerely stylish tale of a boxer who comes out of retirement to finance his girlfriend’s abortion, Servants confirms
the director as a major talent.

On digital platforms from May 14th