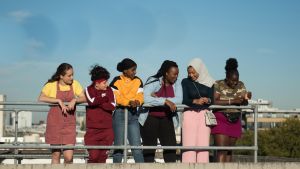 There is a magnetic sense of sisterhood among the culturally varied girl group.

Suffragette and Brick Lane director Sarah Gavron workshopped for more than a year and cast from comprehensive schools in east London to create this electrifying teen drama. Those preparations tell in a film that feels as authentic as it is boisterous.

Rocks (played by the brilliant Bukky Bakray) is a British-Nigerian 15-year-old returning to school with her loud and lively chums Sumaya (Kosar Ali) Agnes (Ruby Stokes), Yawa (Afi Okaidja), Khadijah (Tawheda Begum) and Sabina (Anastasia Dymitrow). The ethnically diverse group are as tight as they are apt to stage a food fight in home economics.

Rocks hopes to be a cosmetologist and makes a little money doing eyebrows at 50 pence.

She’s doing all right until her mum Funke (Layo-Christina Akinlude) leaves to “clear her head”. There’s a hastily written note saying “sorry” and an envelope of cash for Rocks to take care of her seven-year-old brother Emmanuel (scene stealer D’angelou Osei Kissiedu). This, notes the resourceful heroine, has happened before.

Together the children duck and dive around their apartment hoping the neighbours won’t notice and that the authorities won’t separate them. But the money soon runs out and the pair can’t hide their situation forever. She pushes away her friends and swears that everything is fine.   The scenario ought to make for classic British miserabilism but Rocks is too lippy and funny to play like kitchen-sink drama. There is, too, a magnetic sense of sisterhood among the culturally varied girl group. A visit to a mostly white area prompts a comparison to Get Out’s “sunken place”.

That sense of understanding that extends to the Russian hairdressers who agree to babysit Emmanuel. Casting director Lucy Pardee, whose credits include American Honey, has assembled the most charismatic cast of the year.