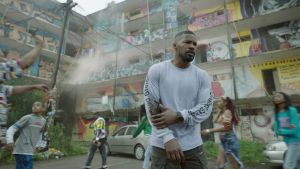 Over the last few years, Netflix has been working to develop its own school of easily recyclable action junk. The endeavour yielded apparent dividends with Extraction (Hemsworth versus drug lords) and The Old Guard (Theron versus the universe) – both of which are rumoured to have triumphed within the service’s voodoo economics – but this latest exercise in creative mayhem offers the most fun yet.

Project Power, chock-full of hectic urban pursuit, bad men with their heads on fire and unlikely friendships between plucky renegades, may be the best 1990s movie released this year. The spirit of Willis is strong within you, young film.

The central concept is not enormously original. Inclining towards Neil Burger’s undervalued Limitless, the picture imagines a powerful drug that can turn ordinary men – and Jamie Foxx – into different classes of super-being. The downside is that the effects last only five minutes. So, one pop song’s duration away from ingestion, you’d best not be standing before a hurtling train.

As the narrative gets ever more caught up in its own demented gyre, a conspiracy theory emerges about the government testing unsafe pharmaceuticals on its more vulnerable citizens. There are a few too many reminders of genuine (if that’s the word) internet paranoias here, but all that chatter is little more than a McGuffin-matrix within which fine actors work convincing magic.

Jamie Foxx, Joseph Gordon-Levitt and Dominique Fishback really are delightful together. Gordon-Levitt is Frank, a New Orleans cop who has got into the habit of buying the super-gear from otherwise responsible Robin (Fishback). Art (Foxx), a veteran with a temper, initially skirts the violent periphery before enlisting the plucky young woman in a mission to free his daughter from the malign elite.

Ariel Schulman and Henry Joost, who came to fame with the controversial Catfish before moving on to Paranormal Activity sequels, lay out their stall early with two or three top-notch action sequences. Foxx shows pluck when confronted with a version of the Human Torch in a rundown apartment building. Gordon-Levitt, back in Looper mode, strains every muscle during a magnificent chase through the Big Easy. He is on a bike. The villain, whose version of the drug has made him a class of chameleon, is first on foot and then in a streetcar. The directors push the physics just far enough to confirm we are in a cartoon universe, but not so far that any miracle seems possible. There is still some jeopardy there.

The screenplay by Mattson Tomlin, writer of the upcoming The Batman, works in a few semi-serious arguments. “We know what happened the last time we trusted guys in suits to look out for New Orleans,” somebody says. A sense that people of colour are still misused and undervalued hangs over the drama.

But Project Power mostly succeeds on old-fashioned smack-’em-up and sure personal chemistry. Forget about off-the-peg, mega-trash villains who get far too much time to explain boring schemes in the picture’s closing 30 minutes. Foxx confirms that he can seek weary revenge as convincingly as any Eastwood, Bronson or (is this too much?) Marvin.

As every such performer should, he gets at least one scene moping in a neon diner as the wide twilight dims. Gordon-Levitt has always kept room in his cheek for a well-placed tongue.

The star of the piece is, however, the rising Dominique Fishback. The African-American actor grabs hold of a part that a less determined actor might have squandered and hammers it into an unignorable showcase. Like Doris Day in The Man Who Knew Too Much, she even gets an unlikely musical number. Only a monster would begrudge her the indulgence.

Streaming on Netflix from today

Graduating in a pandemic