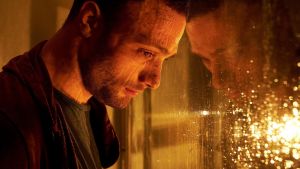 Dublin-born actor Lauren Coe is wildly impressive as Laurie, a friendless 16-year-old who has lately returned from Ireland to the Yorkshire seaside town where her mother (Sadie Frost, reminding us all how good she is) grew up. She’s running on the track at school when she attracts the attention of Pete (Cosmo Jarvis), a 33-year-old odd-job man.

Pete is a rudderless soul who lives in the houses he paints and decorates and who has recently split up with his girlfriend. His first attempts to speak to Laurie are, understandably, rebuffed but she finally accepts an invitation from the “creepy f**k”.

The pair tour what passes for entertainment in coastal Yorkshire, almost in accidental tribute to Morrissey’s Everyday is Like Sunday. They play a childish chasing game in a tacky arcade. They down shots at a nightclub where Laurie, hitting the floor of a silent disco, gets too drunk.

Pete’s careful attendance of the inebriated adolescent rather telegraphs the plot twist ahead. Oh yes he is.

For all the doom and gloom around the industry, this has been a particularly strong year for young British directors, with Fyzal Boulifa’s Lynn + Lucy, Claire Oakley’s Make Up, Rose Glass’s (incoming) Saint Maud, and Nathalie Biancheri’s Nocturnal opening within months of one another.

At 85 minutes, the Biancheri’s debut feature can feel a little slight. Nocturnal remains an impressive piece of work, nonetheless, anchored by a two-step between the smart-mouthed Lauren and her painfully awkward adult chum. In common with Calm With Horses, the brooding Brando-alike Cosmo Jarvis occupies most of cinematographer Michal Dyme’s carefully composed, boxy 4-3 ratio frames.