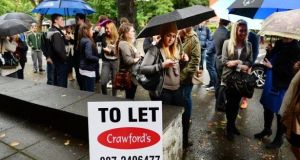 A ban on evictions until January will cover people unable to pay their rent because of the Covid-19 pandemic if they make a declaration to the Residential Tenancies Board, according to Minister for Housing Darragh O’Brien.

Introducing new rental legislation in the Dáil, he said it would help tenants in arrears and those on a Covid-19 welfare payment, on housing assistance payment or who have lost their job because of the crisis caused by the virus.

The legislation, which passed its second stage vote by 75 to 55, also bans rent increases for tenants receiving the pandemic unemployment payment, or the temporary wage subsidy scheme.

All other tenancies revert to the pre-Covid rules from August 1st, except for renters whose notice of termination expired during the pandemic. They have been given an extra nine days until August 10th to vacate.

Ninety days eviction notice, not 28 as now, will have to be given to people who make a written declaration that the economic impact of Covid-19 has rendered them unable to pay their rent.

The earliest they can now be evicted is January 11th, 2021. The new legislation is introduced as the previous pandemic emergency ban on evictions and rent increases comes to an end on August 1st.

Though the Minister said the moratorium could not continue indefinitely, a swathe of Opposition TDs said it would open the door to evictions and increase homelessness which has fallen during the pandemic.

Sinn Féin housing spokesman Eoin Ó Broin said the Bill “is nothing short of an attack on renters. It strips vital protections from the vast majority of tenants just when they most desperately need it”.

He said the protections for renters whose incomes have been hit by Covid-19 are “weak, overly complex and it will be very easy for a small number of rogue landlords to get around”.

Social Democrats spokesman Cian O’Callaghan said the legislation is “complex, full of loopholes” and “ignores” the fact that Covid-19 is still here. Regional powers to ban evictions should be in place to deal with local virus spikes, he said.

People Before Profit TD Richard Boyd Barrett said “the slithering, sliding and U-turns of Fianna Fáil and the Green Party in particular have begun in earnest with this Bill”.

“This is a shameful betrayal of tenants that opens the door to a new wave of evictions into homelessness in the midst of a pandemic.”

He said it will “allow landlords to resume evictions on the grounds of sale which was one of the major causes of evictions into homelessness prior to the pandemic”.

Independent TD Michael Healy-Rae, who is a landlord, said some TDs were talking “as if property falls out of the sky” and lands at the feet of landlords. They have mortgages, too, and yet they are being described as “bad people” .

“You do have to remember that there are people whose jobs are not affected and who didn’t lose any money and who stopped paying rent. Landlords still have to pay their mortgage,” he said.

Replying to TDs, Mr O’Brien said the Government recognises that Covid-19 has been hard for many tenants, “particularly” those working in the worst-affected sectors such as hospitality.

“The tailored approach in this Bill targets a prohibition on rent increases to those who most need them. It protects tenants from imminent tenancy termination caused by rent arrears,” he said.

But he recognised that landlords had been affected too and they had “constitutionally protected property rights”. This legislation seeks to protect both tenants and landlords, he said.